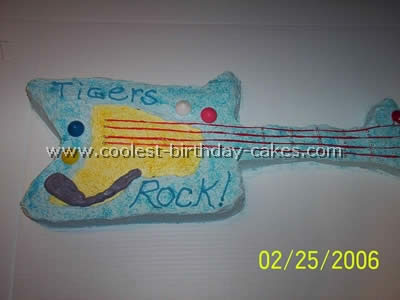 We made this guitar cake from 2 chocolate cake mixes, froze both cakes and used my son’s guitar as a pattern. I used one cake for the body and very little of the other for the neck. Food coloring of course to color the icing, pointed gumballs for the buttons, silver dragees for the tiny buttons to attach the strings which were made of fruit roll-ups cut into strings. The lever was made of fondant which we added some black food coloring to and added some colored sanding sugar over the blue icing and yellow sanding sugar over the yellow icing.

Everything on the cake had to be edible as this was for my son’s Cub Scout Father/Son cake bake which had to be me baked by them. My son came up with the idea to make a guitar and I came up with the supplies needed to make it. Needless to say he did not win a prize but we thought it was a great idea. It tasted awesome even if it didn’t win a prize.

I made this guitar cake for my brothers 16th birthday. I used the Wilton guitar pan. The instructions come with how to make the acoustic guitar so I had to go by a picture I found when decorating it.

Make the base from plywood to fit entire guitar. For the actual guitar cake start with the neck. Bake three long pieces and fashion keys. Glue together with royal icing.

To decorate the guitar cake, make the pickups and whammy bar and bridge. Shape the body.

Make proportional to the neck.

Use complementary colors to line the case.

This guitar cake was surprisingly easy. This is only my 3rd attempt at making decorated cakes. My daughter loves her guitar so we decided to make her one. She absolutely loved it!

We found a Wilton cake pan and used 3 pound cake mixes, 2 were for the bottom and one for the top.

We spread a layer of chocolate frosting in between. I think it would be fairly simple though to cut it from sheet cakes.

This is a life size fender strat guitar cake. I used a 15”x15” square sponge with jam and cream. I made a template from the guitar and cut out the shape. For the neck, I used a small square sponge.

Colouring the icing was the hardest; I used the kneading handle on my mixer. I used chocolate cups turned upside down for the volume knobs and sweet laces for the strings of the guitar cake.

For this cake, I printed down a photograph of the guitar that my nephew had received as a gift for his birthday. I made it into a stencil. I baked the cake in a lasagna dish using white cake mix. Then I baked a chocolate in a 9×13 for the neck of the guitar. I froze the cakes overnight. Laid the stencil on the frozen cake and carved the shapes out. I made the accessories from fondant. There you have it…

This cake is my version of a white Gibson Les Paul guitar (my first attempt at cake decorating – I’m hooked!). White is not a very dramatic “color” to use, but it’s an inside joke with my boyfriend. He already has two Les Paul’s but wanted a white one, so I got him one! (haha).

This was made with a Wilton guitar cake pan – it’s actually a vintage one I got from eBay (not much different than the modern one but the neck is a little bit longer). I made it all white to keep the theme – standard white cake and white frosting. The decorations were done with Wilton pre-made fondant in “people” colors (I needed the black and browns for the guitar parts) and black and white icing.

I used a picture of a real Les Paul to try to get the details right. The tuning posts were done with the light brown fondant (because it’s the most similar to gold) embedded on toothpicks.

The Dog ate my Guitar Cake

The guitar cake was for my brothers 33rd birthday; he loves music and plays the bass. I couldn’t afford a present so this was the next best thing – He loved it, Unfortunately so did his dog who ate what we didn’t want in the first sitting.

For this cake, I made 3 square cakes; two for the body, and one I used to piece together the neck, and that little horn on the body. I rounded the corners of the 2 body cakes, just using a regular butter knife. Then, I tried to make red food coloring, but no matter how much red food coloring I used, it just ended up pink.

I also used some chocolate frosting to give the guitar depth and so it wouldn’t look all pink! Then I used pieces of a large chocolate bar as the pickups. I had a can of frosting that comes with the tips, so I made the frets with that. Then I used Twizzler pull and peels to make the strings, and some green mints for the knobs.

I couldn’t find a good pan so I just used a picture of a guitar to make the cake. It was fun. I would suggest making it blue or green to avoid the frustration of a pink cake.

This cake is made from the Wilton guitar cake pan with butter cream frosting.

Only the guitar body is cake; the neck is carved Styrofoam. The body is carved from a 9×13 marble cake. The whole thing was covered in butter cream and airbrushed red. Fondant accents were added, then black butter cream guitar strings to finish.