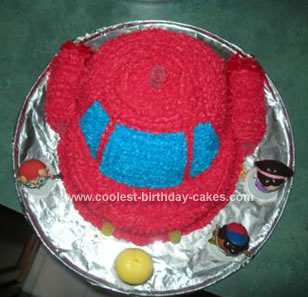 For the Little Einstein Rocket cake, I used one nine inch cake pan for the bottom, a 2.5 quart Pyrex Glass bowl and 2 Twinkies for the rocket boosters.

For the icing, I used a Wilton Frosting mix box and a flower tip for the icing design. I also used an entire little jar of the red no taste coloring to get the right red. It looks pink in the bowl when you’re frosting it looks red. Gum drops for the lights and antenna.

I will have to say that I had to bake two dome’s because I put too much cake in the bowl the first time and it would not bake. You need one box of cake mix for 2.5 quart glass bowl and it needs to bake almost an hour because of the density but just keep checking it. I used another box of cake mix for the 9 inch round and used the rest of the batter for 12 cupcakes.

I always use buttermilk instead of water or regular milk and the cakes were really moist and not dried out (especially the dome). This cake was not as hard as I thought and my son loved it. We used the figures from the Disney store to place around the cake.