Take a look at these cool homemade Race Car cake ideas shared with us by cake decorators from around the world. Along with the birthday cakes here, you’ll also find loads DIY birthday cake-making ideas and how-to tips to inspire your next birthday cake project. Enjoy!

And don’t forget… if you end up with a cool cake, have great tips to share or pictures of awesome birthday cakes you’ve made in the past, share them here and be a part of our coolest birthday cake community.

Our Elementary School PTA sponsors a “Cake Walk” as a fundraiser during our school fair. The children have an opportunity to win a cake. This is one of the cakes I made for this year’s cake walk. It is a race car cake made with a Wilton cake mold and Wilton Icing tubes fitted with a decorating tip. Underneath is homemade cream cheese icing.

My oldest son loves hot wheels cars so we had a Hot Wheels party. I intended to make a 3-D car cake but that attempt failed. My second idea to make a race car cake worked well and was much easier.

I baked a cake mix in a 9×13 pan and noticed when I removed the cake from the oven that the cake slanted up at one end. It had the shape of a race car already so I cut a rectangle out of the pan leaving about 1″ on each side. I used the two strips of scraps for the top of the car and the back “fin”. I secured the fin with toothpicks and frosting.

I tinted white frosting with blue food coloring and used canned decorating frosting for the writing and outlining. I used Oreo cookies for the tires and stuck two white Dum Dum suckers in the front for headlights. For the back bumper I broke up a Hershey’s bar and used the individual bars. This cake was a big hit.

I made this race car cake for my boyfriend’s mom whose favorite NASCAR driver is Tony Stewart. I used Wilton’s NASCAR cake pan. I used a white cake mix and put half of it in another bowl and added a packet of orange jelly then marbled the orange and white in the pan. I outlined the major features in black first then filled in the rest with a star tip. I added the text last.

I used a square pan and a pattern my nephew found on the back of some Cars invitations. I was so flattered that he asked me if I could make him a race car cake like the one in the picture he cut out and sent me!

I copied the idea from the black and white picture and then put the toy car on top. My nephew loved the cake and he really loved getting to keep the car!

My friend is a huge Ricky Rudd Ford Fusion Snickers 88 NASCAR fan. So I used the Wilton NASCAR pan and ignored their design for my race car cake. I just found a picture on the web and tried the best I could to recreate it. He may have been turning 20 but he sure loved it!

One of my decorating instructors said that black is the toughest icing color to make and it’s easier to buy the tube of black icing to keep around for little touches. This helped me out in a bind for this cake cause I didn’t need a lot and last time I tried to make grey (not even black) I added a little black to white and it turned a bluish grey. I recommend buying the Wilton tube of black icing just to have on hand.

Cake by Swart B., Seabrook, NH

This is a Tony Steward Nascar cake I made using the Nascar pan.

Cake by Becky D., Bedford, IN

We baked the race car cake in an 8×11 pan. Then we slanted the front end and used donuts cut in half for the top. The piece that we cut out for the front we used for the wing in the back. We used 4 whole donuts for tires. We used yellow icing for the headlight and red icing for the tail lights.

I designed nascar cakes with the race fan in mind. I used my horseshoe pan from Wilton to make the track. To make the blacktop I used black colored sugar from Wilton and piled it more on the back stretch.

I visited the Nascar collectors section in the store and purchased 2 collector series die cast cars hoping that Dale Jr. would come in first. I also used sugar decorator candies as an additional interest to finish the sides making this complete.

I used a NASCAR Race car cake shaped pan to make this cake. It was decorated using a Dale Earnhardt Jr. collectible die-cast car as a model. Everything was done freehand using buttercream frosting.

I made 2 cakes because there was going to be too many people to just make one. I used the Wilton race car cake pan. For the colors I chose my stepson’s favorite colors. For the numbers I used his birthday (July 21). Pressing the bags to make both cakes full of stars was tiring on the hands but when I saw how much he loved the cakes it was worth it! 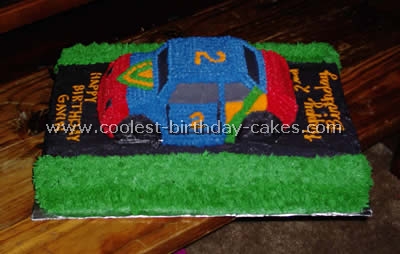