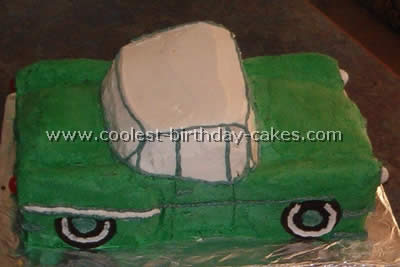 I made this car birthday cake for my father in law. He is restoring a 54 Chevrolet and the car is his baby. I baked two 6X10 cakes and one 8×8. Then I stacked the 6×10’s and cut the 8×8 to be the top part of the car. I made sure to angle the top and round the corners. Then, I carved the hood and trunk of the car. I wanted to make sure I got the lights the way the car is. Then I iced it with buttercream frosting. 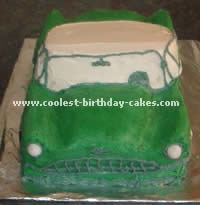 I made a gray for chrome and looking at pictures of the car I made the grill bumpers, Chevy symbol, door handles and outlined the windows. For the headlights, I used white jelly beans and small red ones for the tail lights. I didn’t think it looked done until I piped a steering wheel and review mirror. I used chocolate sandwich cookies for the wheels and I piped white around them to make them look like White walls (by request of my husband). 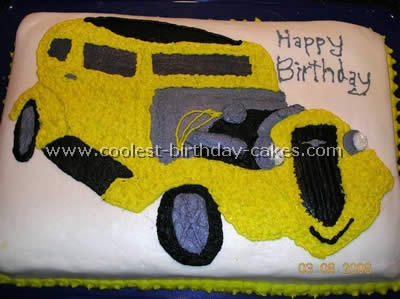 My friend’ Dad has a show car and she thought it would be cool if I could put his car onto a birthday cake. I have been doing cakes for a while but never anything this detailed without a pattern. Usually my cakes are my own creations that I can make how I want but with this I had to try to make it match the picture. It really wasn’t as bad as I had feared once I broke it down into sections.

I baked a regular 9×13 cake, frosted it white with homemade butter cream. I pulled the picture up on my computer, held a piece of waxed paper up on the screen and traced the car. Then I transferred to the cake using a toothpick. It didn’t show real well so I went back over it with a toothpick after I took the wax paper off. Next I did the smooth sections like the roof, windows, grill and running board. I piped them on with a flat tip and then smoothed it.

I wasn’t really sure how I was going to do the engine area so I kept avoiding it till the end. Then I used a small star tip for all of the yellow and outlined with a #2 tip. It doesn’t show well in the pictures but the white part of the headlights has clear sprinkles on them. I almost can’t tell you how I did the engine section, I just kept adding stuff a piece at a time until I felt I had done all I could without doing too much. I wish I had some luster dust to make the chrome areas shiny but we had just gotten 15 inches of snow and I wasn’t driving 10 miles to nearest cake supply for some.

The car birthday cake didn’t come out quite as good as I had hoped but I don’t think I could have come much closer without going 3D. 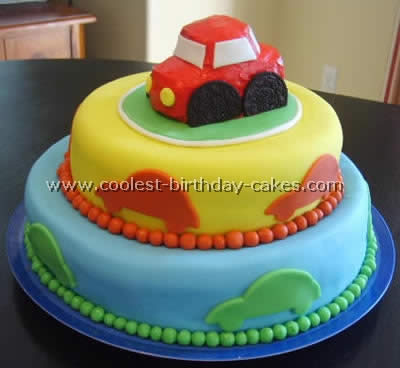 Then, I covered the whole cake with marshmallow fondant which I find to be easier and yummier. Here is the website I used for the fondant instructions. For the top I didn’t use fondant but just covered in tinted frosting and used Oreos for the wheels. I used the top for my son’s smash cake that he could have all for himself. This cake is very easy and very yummy. Thanks for letting me share! 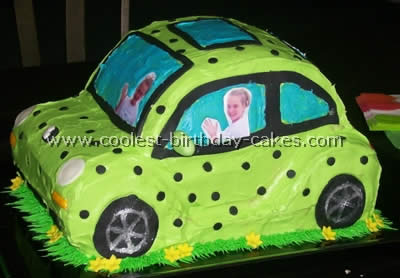 I made this car birthday cake for my cousin who wants a real beetle. I baked two 9×13 cakes and two 9in rounds. Stacked the 9x13s and cut the rounds in half and put together with icing three pieces cut side down to make the arch of the car. I carved the cake to the right shape then iced.

Tip: I would glaze the cake after carving because it was hard to ice without getting crumbs in the icing.

I cut all the trim out of fondant and printed a picture of the birthday girl and put in the windows. She helped with the cake and put the polka dots on the cake “her idea”. 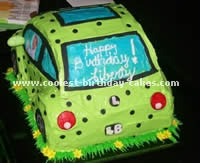 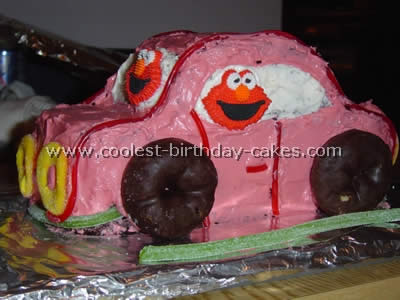 At two years old my son loved Elmo and Cars. So, I couldn’t decide between Elmo birthday cakes of Cars birthday cakes. After seeing cake decorating candies that had Elmo’s face, the thought struck me about putting his face “inside” a car.

I used a 9×13 cake and cut it in half. Then I layered it onto of each other and used the “leftover” end for the top of the car. 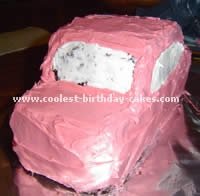 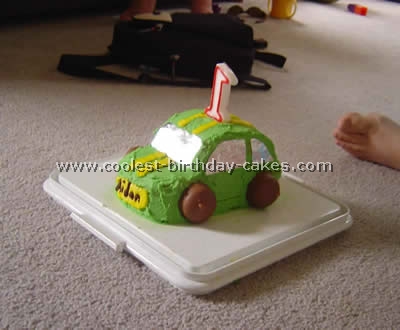 My son loved cars right from an early age. So, for his first birthday I thought I would make him a ‘Beetle’ car birthday cake. (His grandmother had sent him a ‘beetle’ which was his favorite).

I made a round sponge cake and cut a bit off each side to make a rectangle. Then I used those two bits on top to make the roof. (I traced around the cake tin to make a template and only cut the cake when I was sure how much I needed for the roof).

I used tin foil for the windows and mallow puffs for the wheels. In order to frost the cake, I used butter icing but a fondant would probably give a smoother finish. When we brought out the car birthday cake my son was so excited he tried to push it and got icing everywhere.

Take a look at more of the coolest Car cakes…