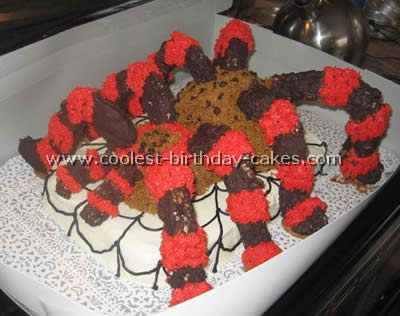 My son really wanted a tarantula cake for his fifth birthday. The base is a rectangular sheet cake iced white with a black web. The body of the spider cake is a soccer ball cake mold. I trimmed the front part down to make it lower and cut the sides off to make it more like the front part of the spider. I also cut a half moon out of it so that it tucked up into the back part of the body.

Then I iced them with buttercream tinted brown with tip #233. I made a red square on the front part. I had downloaded a picture of a red kneed Mexican tarantula from the web and basically tried to mimic it. The legs are rice crispy treats rolled out and shaped like the legs. Then I dipped them in chocolate and let them cool.

They are adhered with toothpicks to the body of the spider and used a blob of buttercream icing to stick them to the cake board. Then I iced them with the #233 tip in red. I also made two smaller pinchers with the rice crispy treats and put them near the eyes. 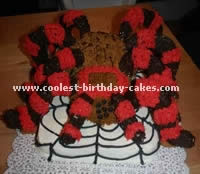 The eyes are black icing. I also took some of the melted chocolate and randomly spotted the body of the spider to make it look more mottled. My son loved the cake and people were amazed at how great it looked. I have to say I had looked at a bunch of the spider cakes on this site to get ideas on how to best approach creating this cake from scratch. I rely heavily on this site for creative ideas! Thanks for hosting it. 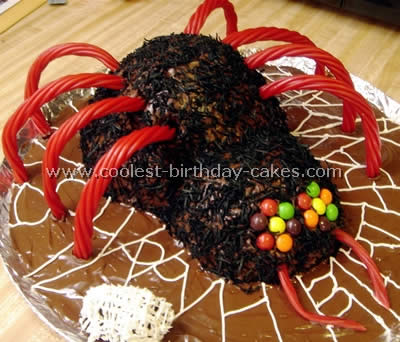 My daughter has a Halloween birthday and she asked for a Halloween theme for her 8th party. The goal of this spider cake was to be sufficiently “icky” but also fun. It featured a surprise inside – guts with bugs! The cake was baked in a Wilton dress cake pan (used for doll figures). Then I carefully cut the rounded part off and set it aside. I kept the cake upside-down and used a large spoon to cut large ditches in the center of the cake. I made these ditches as large as possible without sacrificing the cake’s structural integrity. The result was four cone-like ditches around the sides and a center hole.

Next I made a “dry-run” of this cake for our school’s Halloween carnival cake-walk. The guts were lemon pudding with blue food coloring which yielded a great green color but tasted a bit “odd” with the chocolate. The final spider cake had guts made from vanilla pudding instead. It also featured gummy bugs mixed in! The guts were added into the ditches in the center of the cake leaving about 1″ to the top.

To rebuild the base I cut off the top 1″ of each cake piece originally cut from the center of the cake. These pieces were replaced into their original holes to cover the guts. The cake was finally turned over onto the tray.

The head was pieced together out of the rounded part first cut off the cake. More guts were put in the center of the head. The spider body was covered in chocolate frosting and coconut dyed black for hair. More chocolate frosting covered the rest of the tray. (The “dry-run” cake didn’t have this so the cake and webbing didn’t stand out very well.) 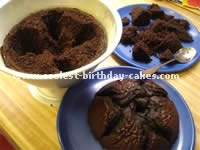 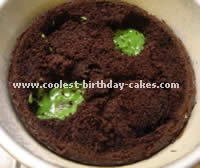 I used white frosting piping to make a web around the cake. I integrated words into the webbing in the spirit of Charlotte’s Web. The spider legs were red string straws (red strings on outside straw in the middle). Sections of the red straws with the surrounding strings removed were cut at angles and shaped into fangs. Skittle clusters formed large eyes. I frosted a scrap piece of cake and covered it with white piping for a captured bug. 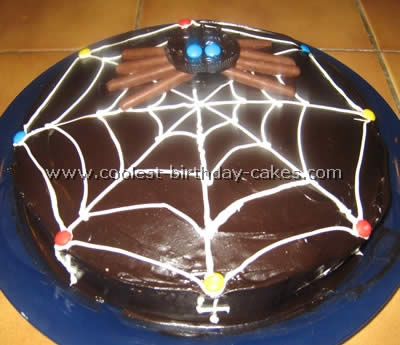 My son wanted a Spiderman birthday but living in Taiwan we don’t have a plethora of choices for cake decorating supplies. Not to mention we only have a toaster oven so we couldn’t do a large character cake! So we settled on a basic spider cake and though it wasn’t elaborate I think they turned out really well. These would also be great for Halloween!

For the cakes we simply used canned frosting to frost the entire round cake. I then piped a web with a Wilton #3 tip. The Spiders are made of Oreo cookies. We couldn’t find licorice or pipe cleaners so we opened the cookies, smeared an additional layer of frosting in the cookies then added chocolate pretzel legs (“Pocky” sticks). I closed up the cookie and then to give the spider a “furry” look I frosted the top then dabbed a knife all over to “pull” the frosting up. The eyes and decorations are mini M&M’s.