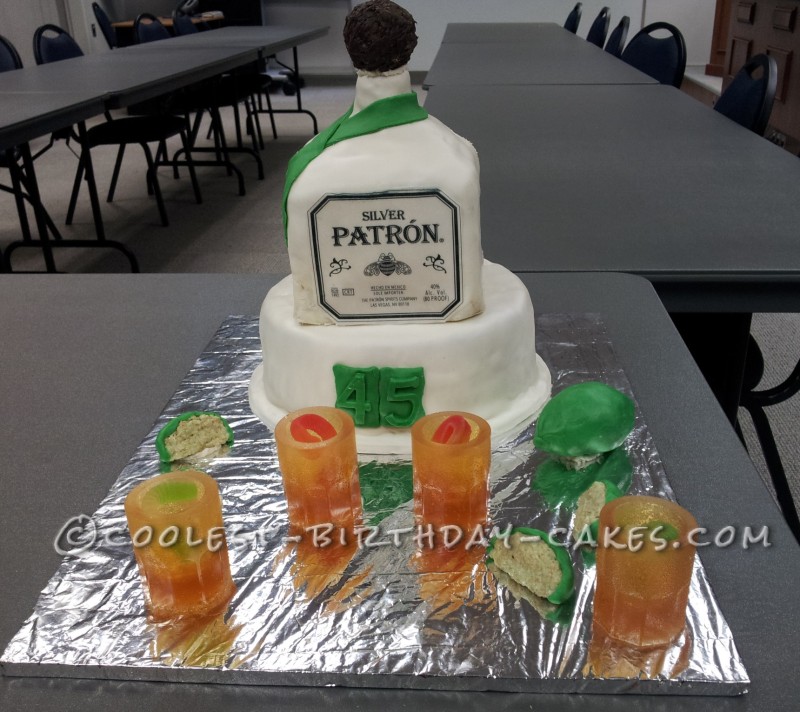 I made this Tequila cake for a friend’s 45th birthday. The base is an 9-inch round cake covered in marshmallow fondant. For the bottle I took a 12-inch square cake and cut it into quarters. I stacked them 4 high for a 6-inch cube and then trimmed the sides of the top layer to slant … Read more 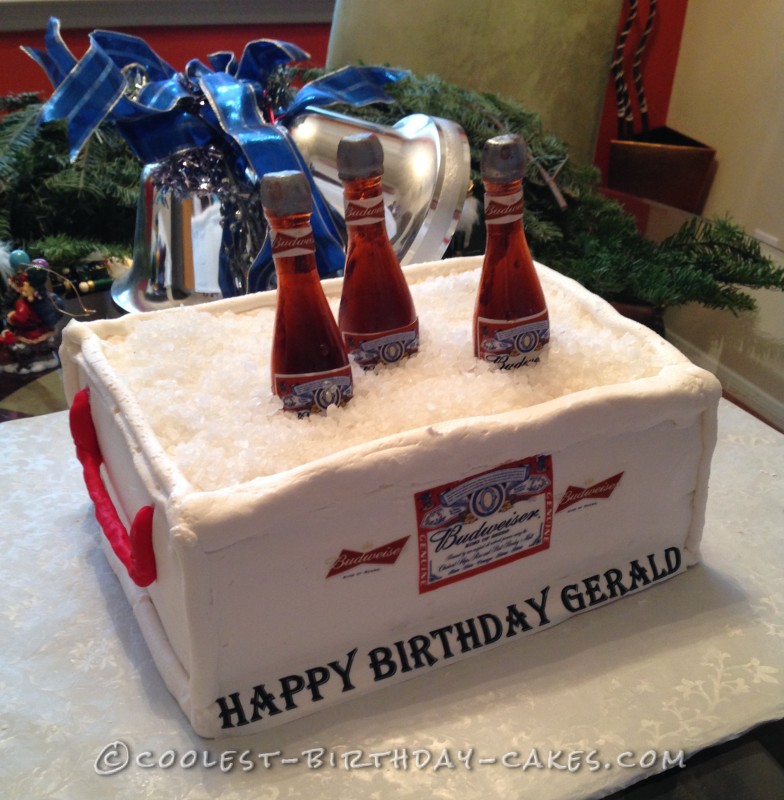 I made this easy beer cooler Budweiser cake for a friend’s husband birthday party. The cake was made of simple white cake. For the cooler I used a 2 1/2 sheet (large) cake pans (Magic Line the best ever!) dividing both layers to create a four layer cake with butter cream frosting in between each … Read more 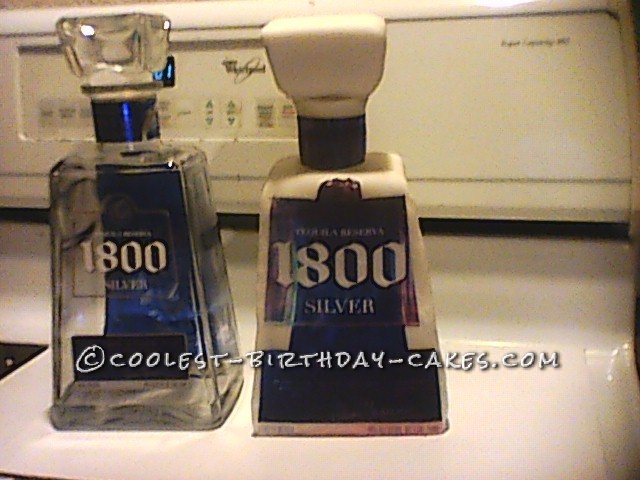 This was not my first liquor bottle cake but i did this one different than usual. Most times I stack layers then trim it into the bottle shape. This time I decided to try standing a loaf cake on end and covering it with fondant.  It worked, until I tried to put the top ( … Read more 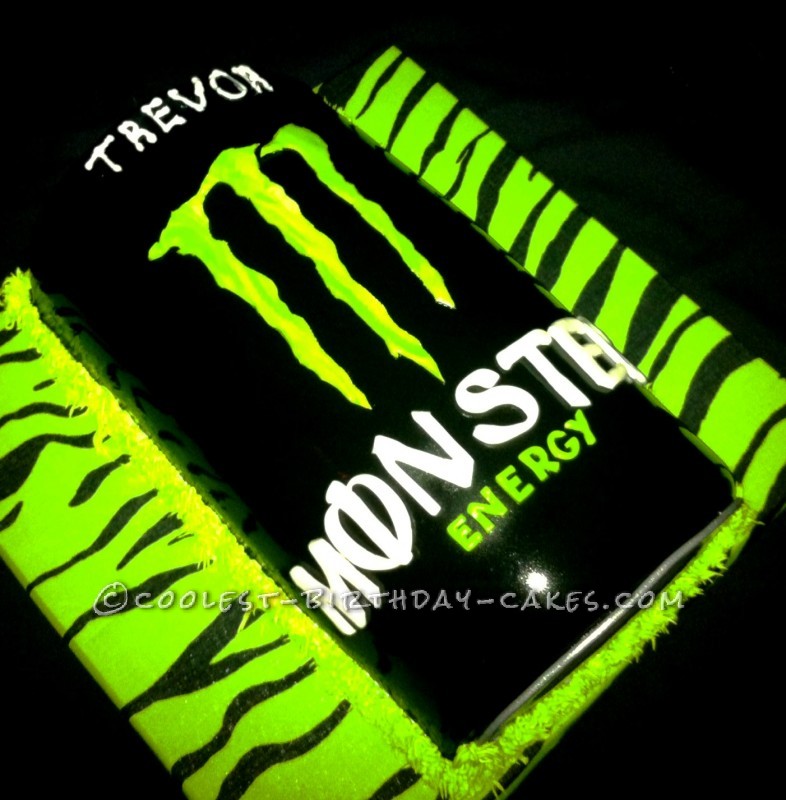 This Monster Energy Drink cake was so fun to make!  It was actually easier to make than I thought it would be.  I made 6 – 6″ marble flavored cakes and iced them together – then cut about a 1/4 of the cake away so that it will lay flat but still have the roundness … Read more 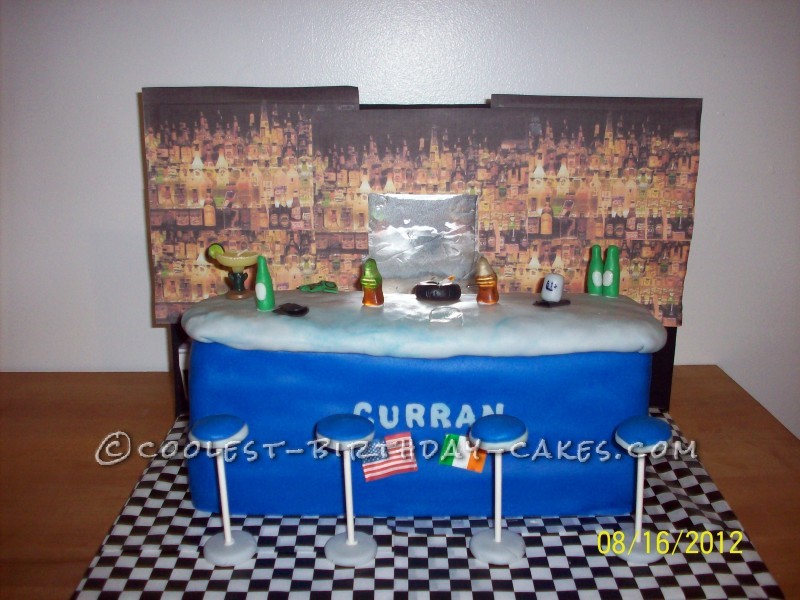 My mom and I started making cakes about two years ago. We have such a great time doing this together. Unfortunately, we give most of our cakes away, but at least we are getting the experience. This bar cake is one of our coolest. It is made from two 13×9 cakes cut in half and … Read more 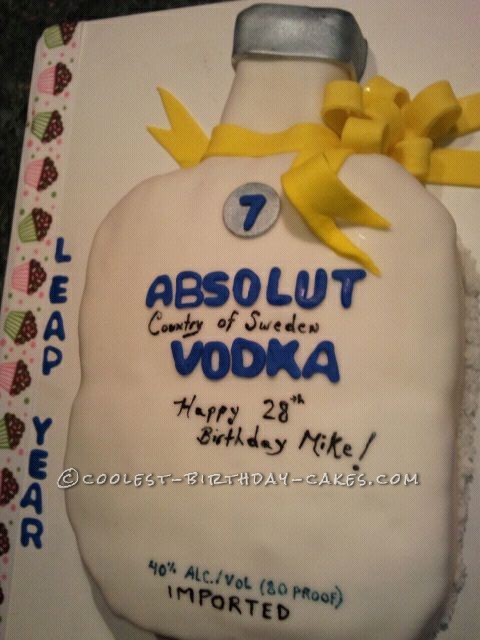 I had a friend that only drinks Absolute and coke where ever we went. It was funny to me but came the time to do a birthday cake I knew the right cake to make, it had to be a bottle of Absolute! Cutting the cake seemed simple, and it was.  Just drew it on … Read more 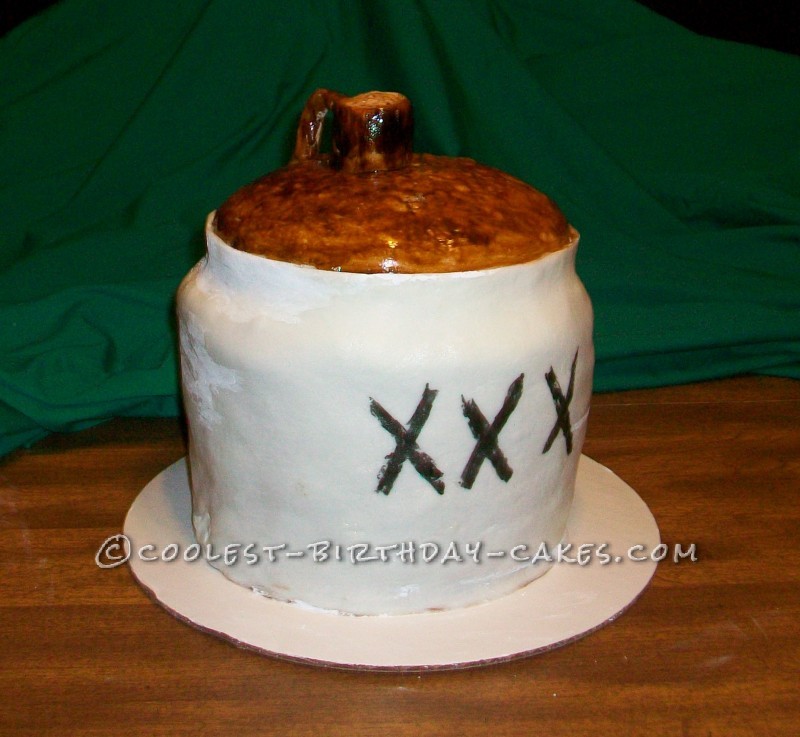 My niece wanted me to make a special cake for my brother. We kicked around a few ideas and came up with a Moonshine Jug cake. I used 8 inch round pans and a glass baking bowl to bake the cake layers in. I made my own fondant and my own frosting. A jug is … Read more 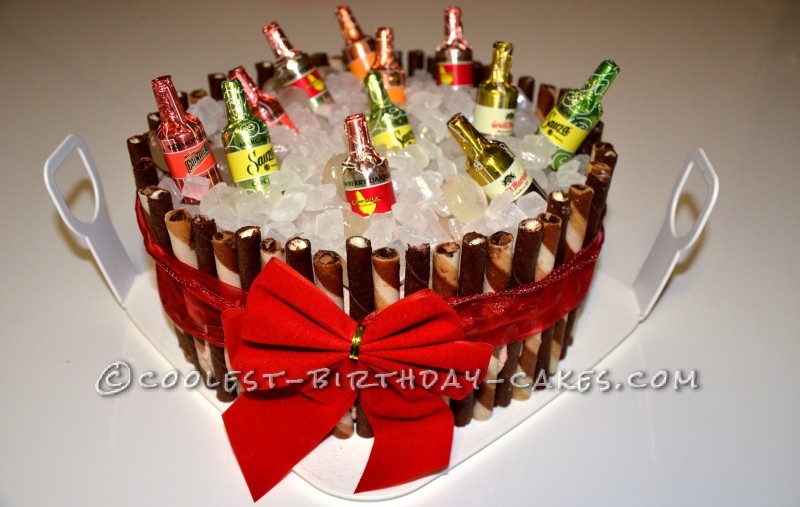 I made this beer bucket cake for Easter 2013. This is a chocolate cake coated with chocolate butter cream frosting. I used chocolate and tiramisu wafers around the cake to make it look like a  bucket. On top of the cake I placed some liquor chocolate bottles. To make the ice I used clear candies … Read more 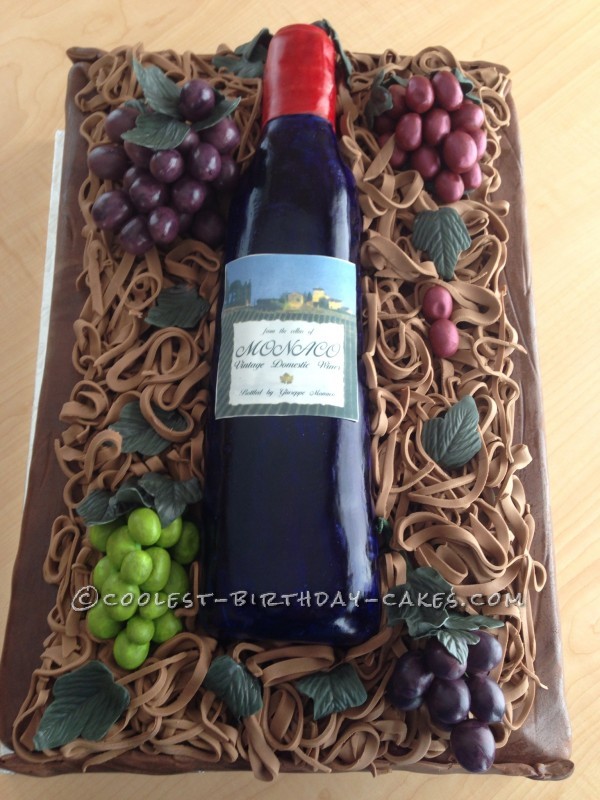 The wine bottle was made out of rice kripies covered in fondant painted in a dark cobalt blue, with ny step-father’s wine label made out of an edible image. The cap was also fondant and had an actual wine stamp in the end,the dark straw was made out of fondant as was the wooden crate. … Read more 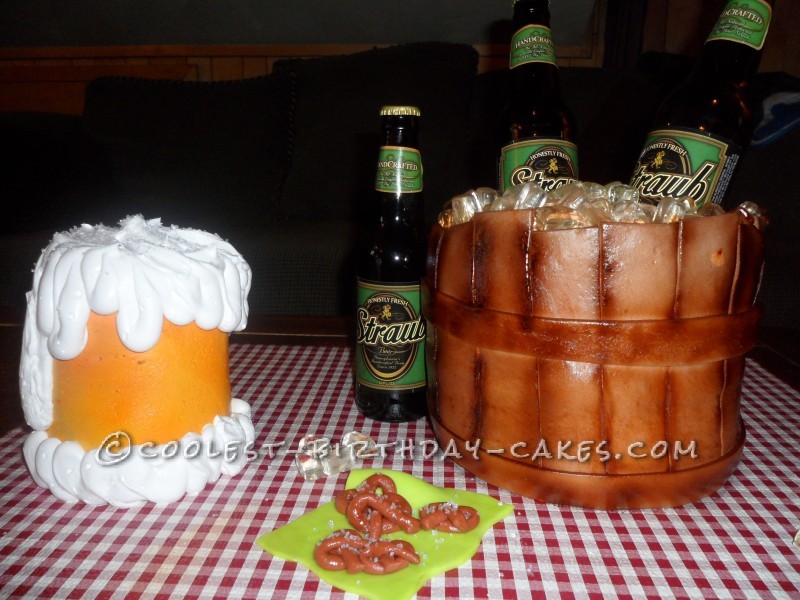 This beer cooler cake was a fun cake to make. I needed to take something to a party and I thought this was a cool idea. I made 3 – 8″ cakes, layered and iced them. I made the sides out of fondant and sprayed it to look like an old ice cooler. I added … Read more 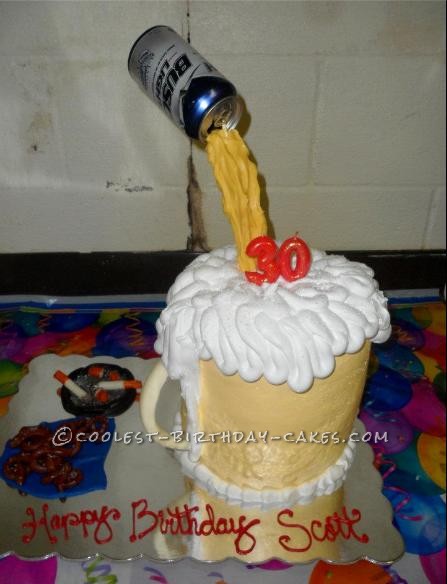 I made this Beer Mug Cake for a friend’s son who was turning 30. I knew he liked to party so I thought how about a beer mug cake that looked like it was sitting on a table with pretzels and an ashtray, also I wanted it to look like beer was pouring into the mug. My … Read more 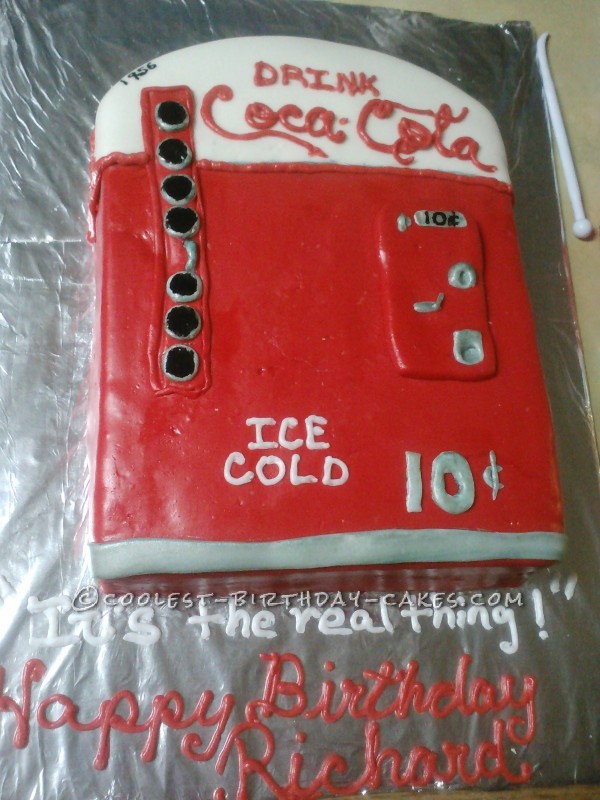 I made this Vintage Coke machine cake for a friend of mine. He wanted something with coke. He was born in 1956. I decided to Google images of 1956 coke machines. I found one I liked and made the cake. I made two  red velvet cakes in a 9×13 pan. I filled it with cream cheese butter cream frosting. I rounded out one … Read more 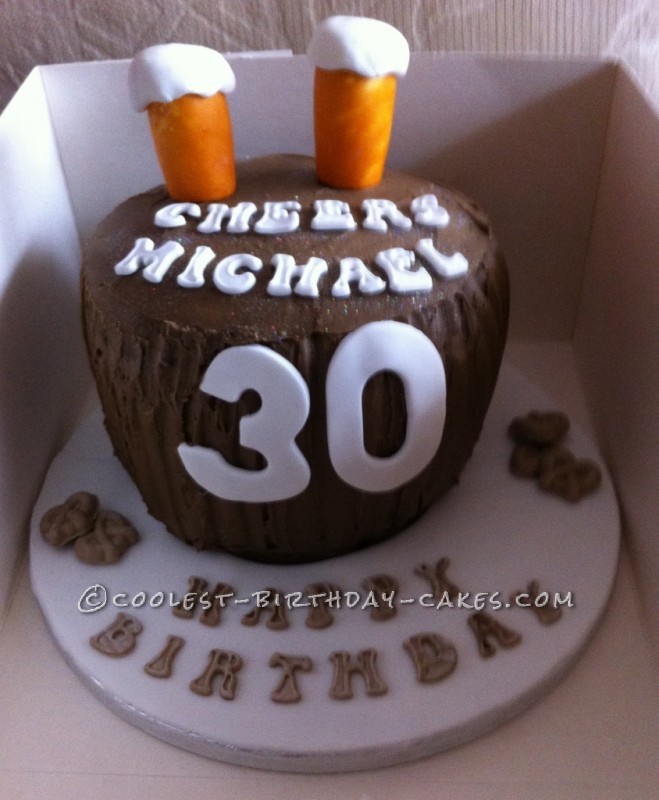 I was asked to make a barrel cake for my friend’s son who is to become 30 years old. She decided to have a cake the shape of a barrel with two pints of larger on the top. I made a four layer 8″ vanilla sponge cake and filled the layers with jam and butter cream then … Read more 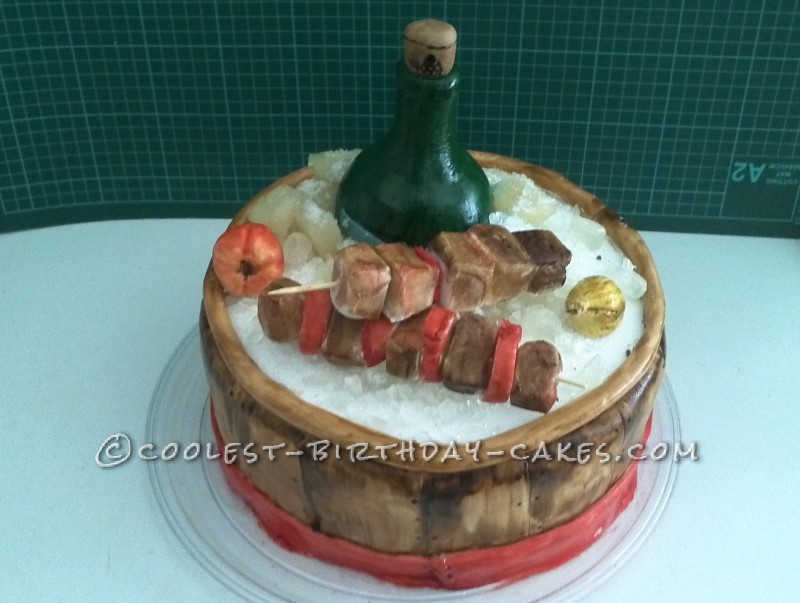 I made this awesome wine and souvlaki cake using a sponge cake: 10 eggs beaten in a stand mixer with sugar for about 5~6 minutes.  I used a spatula and very softly put 250gr of flour and 50 gr of cacao. I put it in a warm oven at 180 for about an hour. I let it … Read more 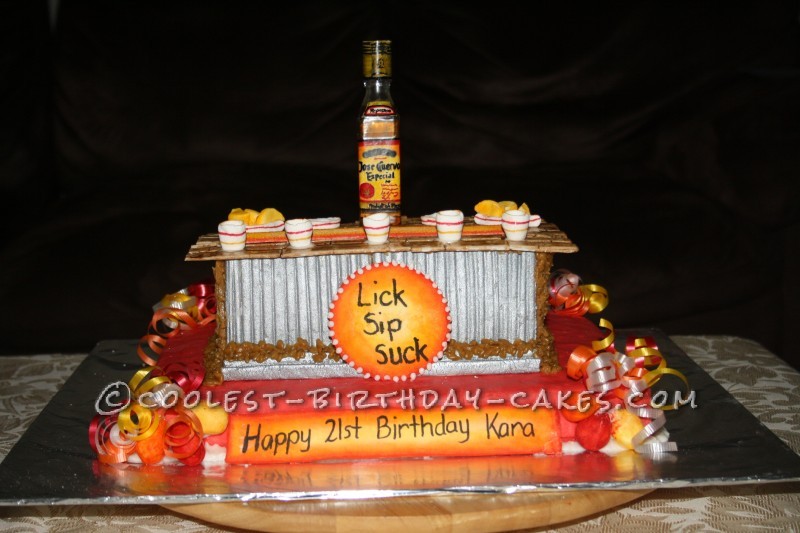 I was asked to do a cake for a young women turning 21 who was not very girly. Her favorite drink was Tequila and the cake was to be very sweet as the family all have a tendency for sweet food. So they decided on a Tequila Bar cake made from a caramel mud cake with caramel frosting and then … Read more 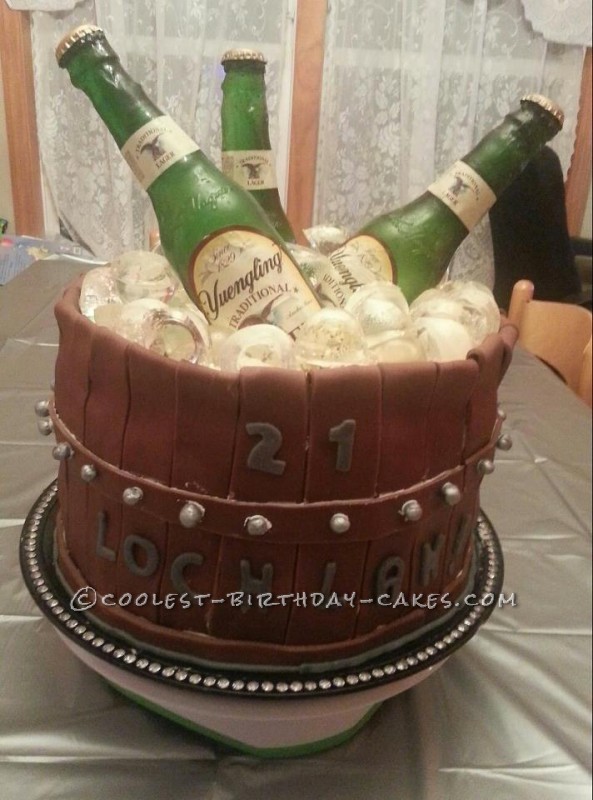 I made 3 round layers using almost 6 carrot cake mixes for this Bucket ‘O’ Beer cake . I put 4 dowels in for stability, and used cream cheese frosting between the layers. On the outside edge I crumbled some leftover cake and mixed it with frosting, then used this around the outside edge to fill … Read more 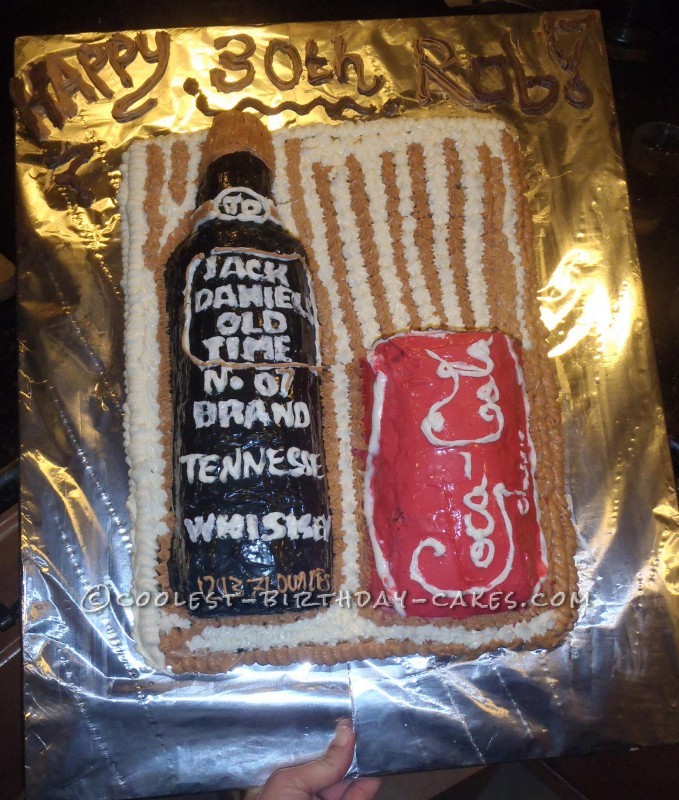 I had a last minute request from my sister the night before to make a cake so my fiance Eduardo got to work on it. I had no time to make the cakes so I bought him 3 flavors, dark chocolate, French vanilla and butter pecan. I baked the chocolate and French vanilla in a … Read more 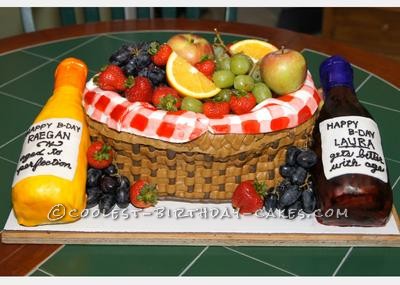 Some friends of ours were having a wine tour birthday party so I wanted to make them the perfect cake to help celebrate their special day. I came up with the idea of a fruit and wine basket cake. The basket is made out of two cakes, carved into a basket shape then covered with … Read more 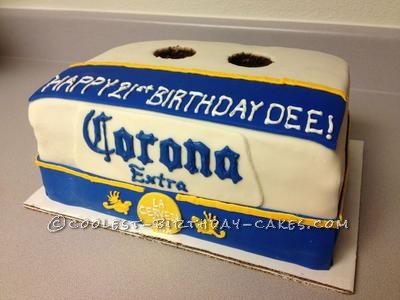 I made this Corona beer box cake for my neighbors friend. I used the wax paper transfer method with royal icing for the decorations and logos. And it’s covered with homemade marshmallow fondant. 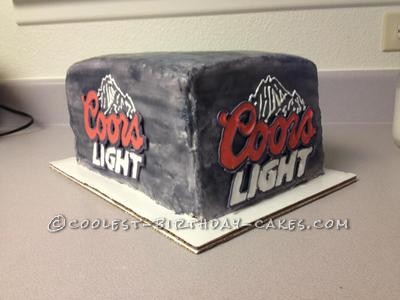 I made this beer box cake for my neighbors friend. They wanted a Coors Light box cake. I used royal icing and wax paper transfer method for the logos and they worked perfect. I only cracked one of them, lol. 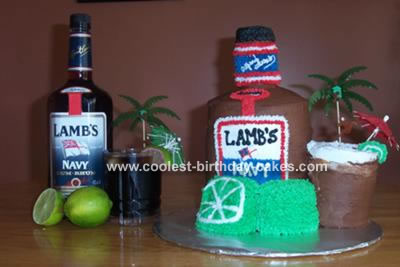 For my friend’s 40th I made him a 40oz cake. I took inspiration from his favorite drink, a Cuba Libra. I set up the bottle, an actual cocktail and lime as my model to make this Navy Rum Cake. The bottle is 2, 6×4 inch round cakes. I also made an 8 inch round cake … Read more 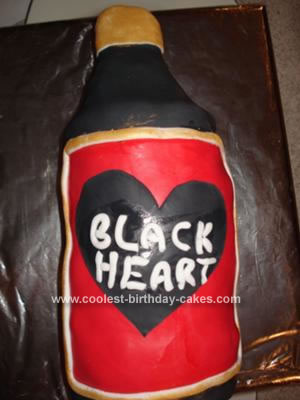 When I was thinking of a cake to make my mum for her birthday this year, the first thing that came to mind was this. Rum is her drink of choice and only ever Black Heart rum. The cake I rushed together on the day so its a very simple version of the bottle of … Read more 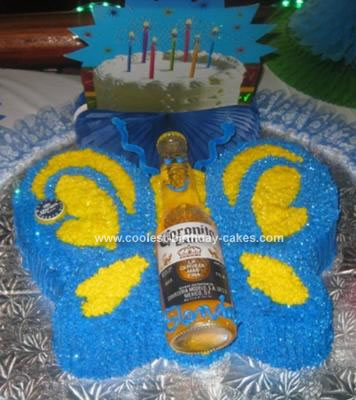 This Corona Beer Birthday Cake is a cake made of cheese. And the bug is replaced by the small bottle of CORONA. The recipe includes 8 0z of cream cheese, six eggs, two cups of self rising flour, two cups of sugar, one tbs. of vanilla and two bars of butter. Firstly you have to … Read more 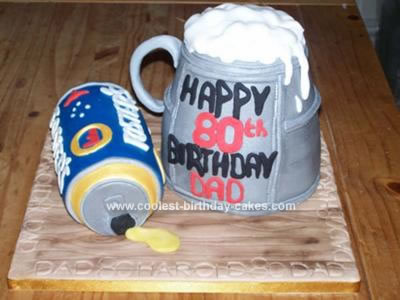 This homemade beer tankard and beer can birthday cake was made for a friend’s dad’s 70th birthday, he is a real ale fanatic! The tankard was fruit cake. The Fosters beer can was Swiss roll for the kids.