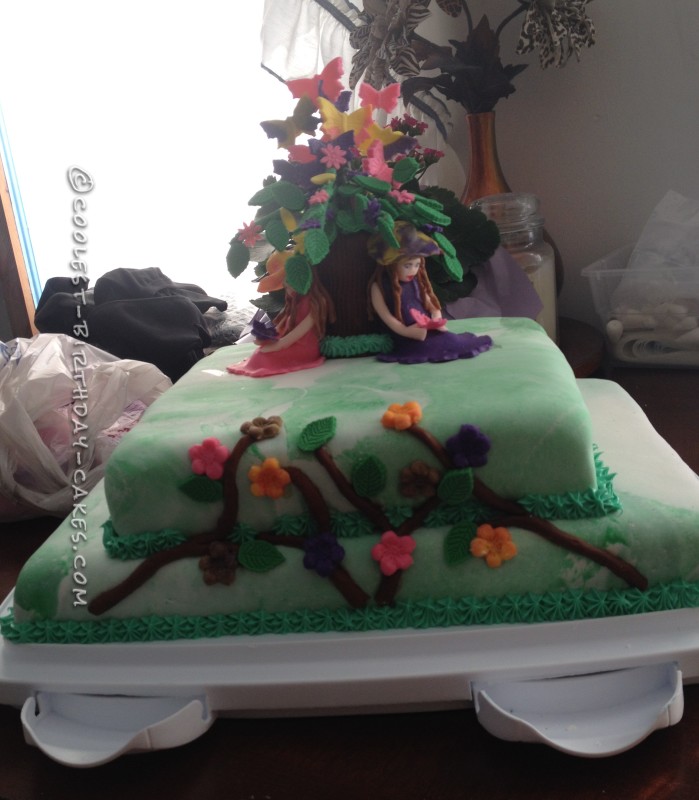 My twin girls wanted a butterfly themed cake. I found a couple years ago, cake decorating is a lot of fun so I have been making their cakes. My imagination was all over the place however it stopped with a two layer cake covered in green & white marble fondant. I rolled a small amount … Read more 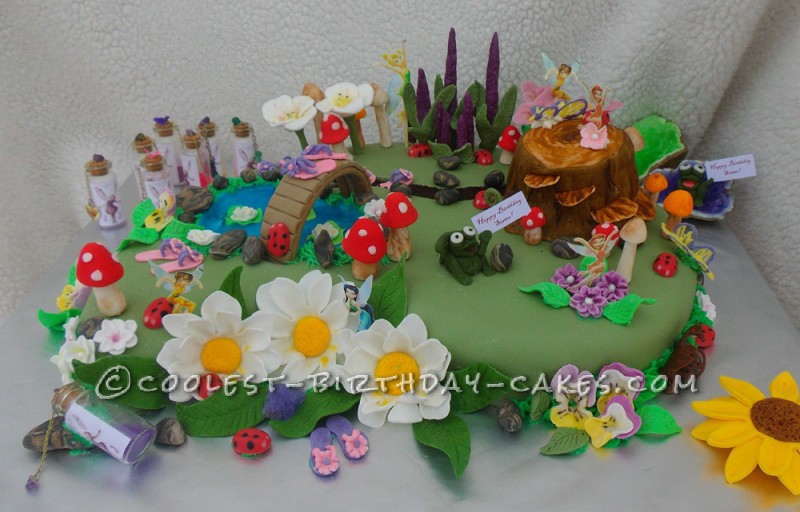 I made this cake for my sister. It was the first real fondant cake I had made. I tried to include all her favorite things. She loves frogs, so I have him holding her birthday sign. Another of her favorites are Johnny Jumpups. They were a bit tricky to make. The purple spikes took some … Read more 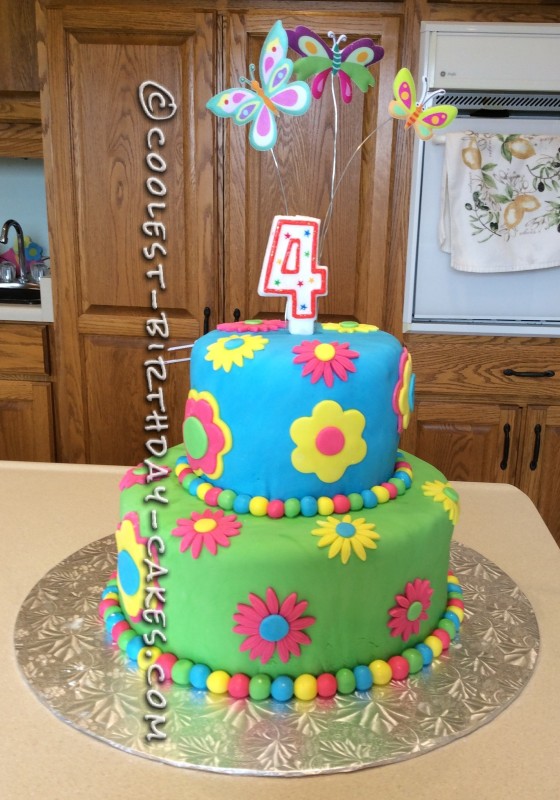 I started by making cake balls, by using a cake pop pan.  I used a box of white cake mix and I added a package of vanilla pudding mix to the batter and I also used milk instead of water, and I used whole eggs instead of egg whites because I knew I’d be tinting … Read more

This tranquil garden cake was made for a co-worker who is an avid gardener. The cake is made of 2 sheet cakes, and covered in butter cream frosting. The walkway, pond lining and birds are fondant. The other accents are candy melts. Everything is edible! This was the “before” photo. Just before it was presented, … Read more 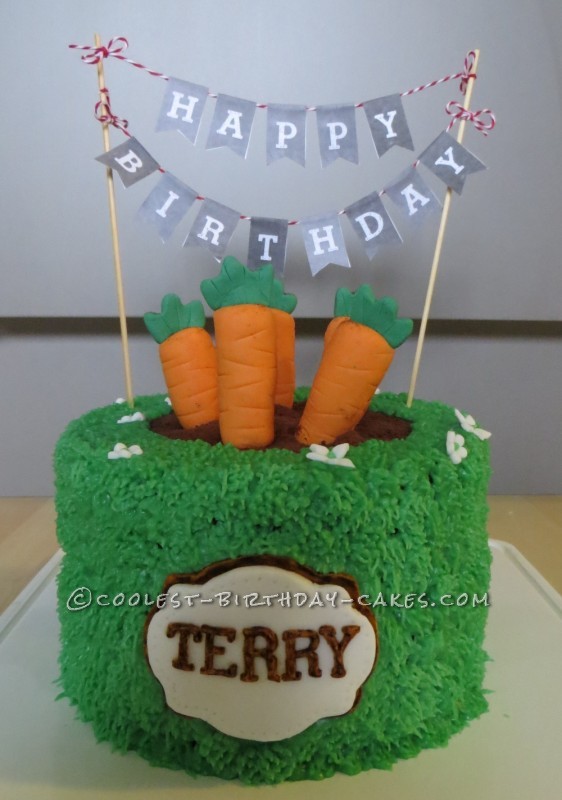 My poor husband was away on business for 2 weeks over his birthday. I’m not sure who had it worse, him alone on his birthday, or me alone with the waking-in-the-night 6 year old! Anyway, I made him a cake on return to make up for it. It was quite quick and easy. I made … Read more 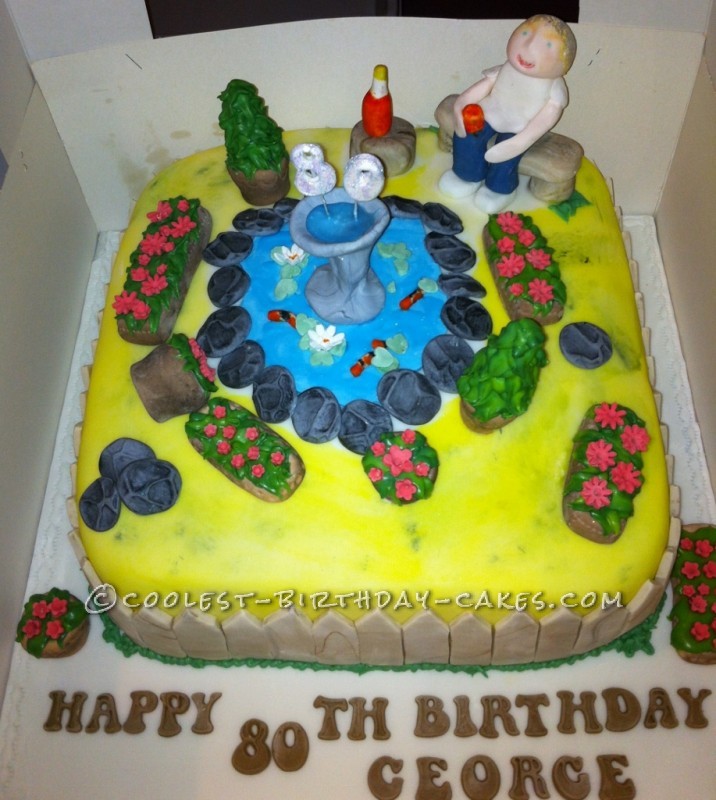 I really enjoyed making this pond birthday cake , it was for an 80 year old man. I was given a hand drawn picture of an idea they had George loved sitting in the garden by his pond and the rest was left to my devices. I started by making different shaped flower pots out … Read more 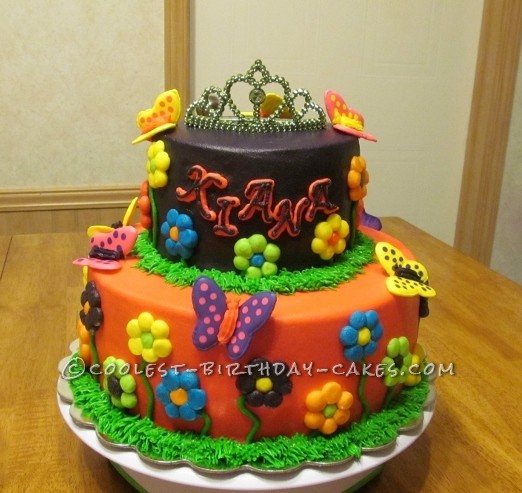 This Butterfly garden cake was created for a sweet girl that loves bright bold colors. Her main request was bright fun flowers. The cakes were made in flavors of chocolate, vanilla and strawberry so that everyone would have a choice once it was cut. The cake is covered in butter cream, not fondant and all the flowers … Read more 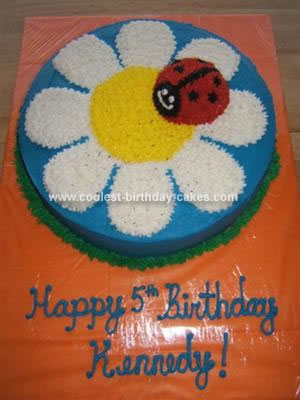 This Daisy And Ladybug Birthday Cake was a cake request I had for a 5 year old little girl’s birthday. I found a picture of a cake similar to this online to use as a guide. I made the cake using 2 12 inch round pans. I filled the 2 layers with my homemade buttercream. … Read more 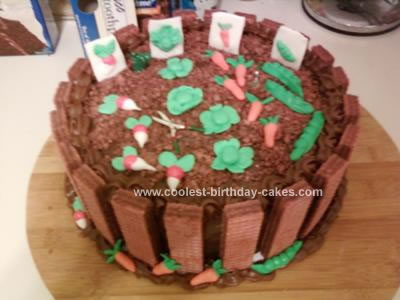 I made this Garden birthday cake for a friend who’s father was turning 70 years old. He loves to garden. I used gum paste to make each veggie and the garden signs. I colored small pieces of the gum paste with food coloring. I molded each veggie by hand. I laid them out to dry … Read more 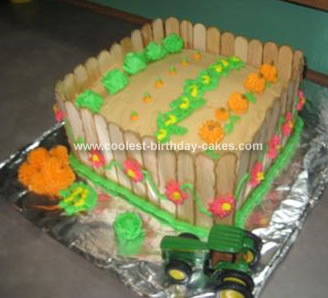 I made this Garden Birthday Cake for my father in law’s birthday. I used large Popsicle sticks for the fence. I made pumpkins, cabbages, squash and carrots. I put flowers on the outside of the fence. I put a tractor on the outside. I used two layers of square cakes. It was a big hit … Read more 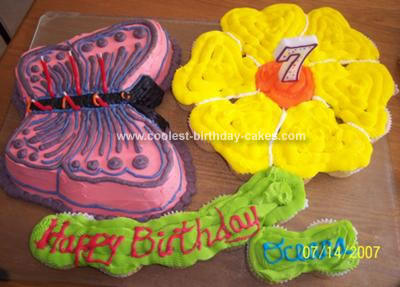 To do the butterfly and flower cake for my daughter’s birthday, I had to buy a butterfly cake mold. So I went on EBay and got a used one for pretty cheap. I used twenty six cupcakes for the flower. I used three yellow cake mixes. I had to mix six different icing colors. For … Read more 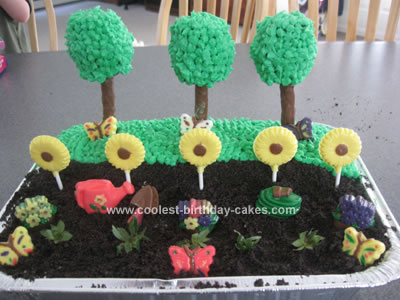 I made this Gramma’s Garden Cake for my Mother-in-law who loves to grow a garden every year with my daughters. The back part of the cake with the trees, is devil’s food cake (a 9×13 inch cake cut in half and stacked) with an Oreo cookie filling and topped with butter cream frosting. I made … Read more 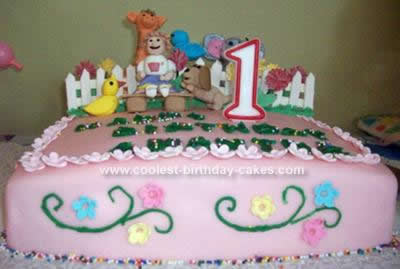 I decided to make a Homemade Garden With Animals Birthday Cake for my daughter’s first birthday since she loves animals and flowers. I made a 4 inch cake made of carrot and chocolate and placed a filling in between layers. I then covered the cake with a thin layer of buttercream icing and pink fondant. … Read more 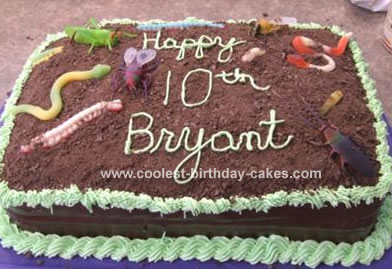 My son wanted a bugs cake. I made the darkest chocolate cake I could, added dark chocolate frosting, ground up Oreo cookies for the dirt topping and found the ugliest worms and bugs I could (at the dollar store). 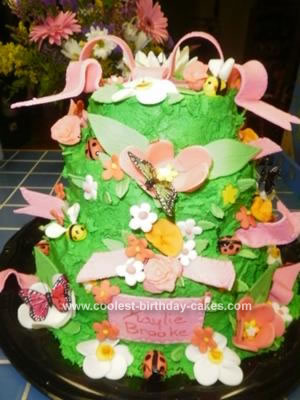 This Garden Party Cake is a 10-8-6 inch yellow cake iced with green tinted buttercream icing. All of the flowers, bow, lady bugs and bees are made with fondant. The open flowers were shaped by letting dry on an upside down shotglass. The bees and lady bugs were painted with black paste food coloring. The … Read more 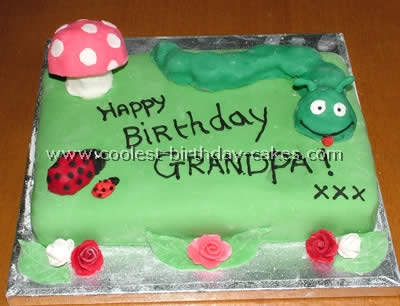 I made this cake for my grandpas 81st birthday- he loves gardening so I thought a garden cake would be a nice idea. I found cake recipes for sponge cakes and baked two square ones, cut one of them in half and placed the whole and half sponge cake together to make a rectangle. I … Read more 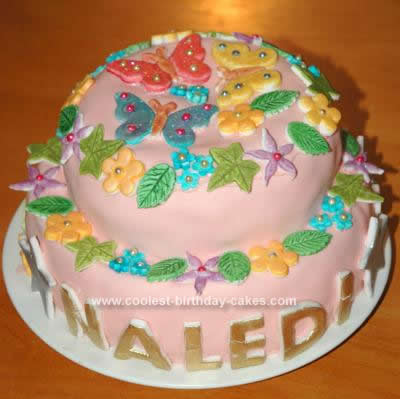 I made this Butterfly and Flowers Birthday Cake for a friend’s daughter’s 3rd birthday. I made 2 different sized round chocolate cakes and covered them in buttercream and pale pink fondant (sugarpaste). I made white fondant (sugarpaste) and I used cutters to cut out her name, age, three butterflies and lots and lots of flowers … Read more 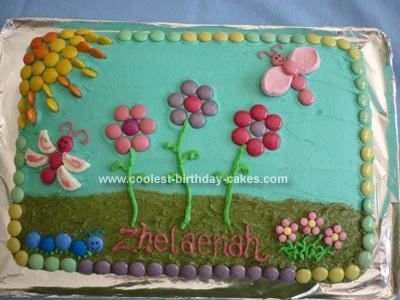 I made this Flower Garden Cake for my daughter’s 3rd birthday cake. It is a 1 1/2 batch butter cake tinted pink with food colouring and baked in a non-stick baking pan. I got the idea for this cake from another cake on this website (Garden 04) – thanks for the inspiration Ginger D. I … Read more 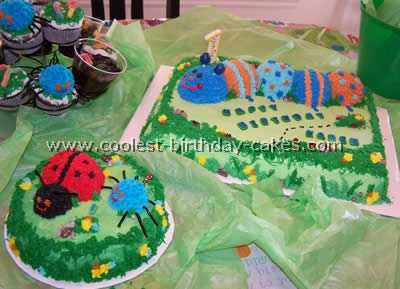 These cakes were for my one year old sons birthday party. They actually turned out even better than I had hoped! I actually used Hostess Sno-balls for the cake recipes and then just star-tipped the frosting on them. It was much easier than cooking a lot of little cakes. We used mini-M&Ms for the face … Read more 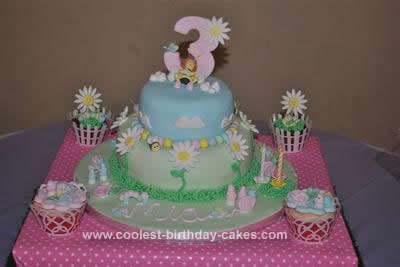 I made these garden bug birthday cupcakes and cake for my grand daughter’s 3rd birthday. The theme was flowers and garden bugs. It was a white vanilla cake, lightly frosted in vanilla butter cream and covered with fondant (blue for the sky and green for the garden). I used a flower biscuit cutter to cut … Read more 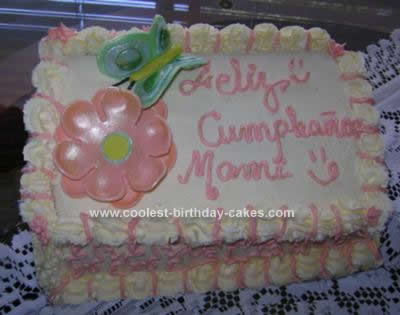 I made this Spring Birthday Cake Idea for my mother; cake is made of 2-1/4 sheet cake. The top layer cake is cut diagonally in order to give a “lavadero” shape like. Cake layers are of strawberries flavor and the filling is made of fresh strawberries cream. Flower and butterfly are made of gum paste; … Read more 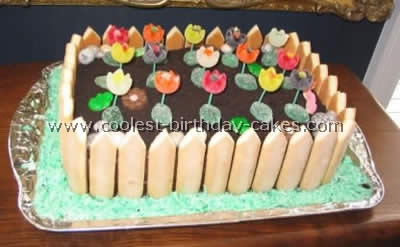 This flower garden was very easy to make! The base is just a two layer sheet cake which I made from one of my cake recipes. The fence is made from lady finger cookies cut into points on one end. The dirt is crushed Oreos. The flowers are made from inverted jumbo gum drops cut … Read more 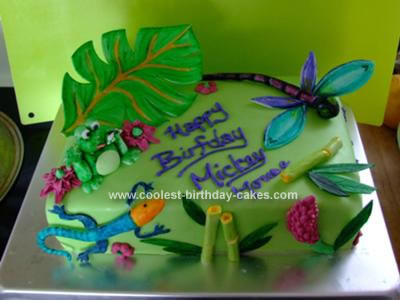 This critter cake is only my second. I took a rectangular cake(boxed) and cut it in half. I put homemade lemon curd on the top of one half and then stacked the other half on top. I then covered it with butter cream. I coloured my fondant with Kelly green and lemon yellow color, rolled … Read more 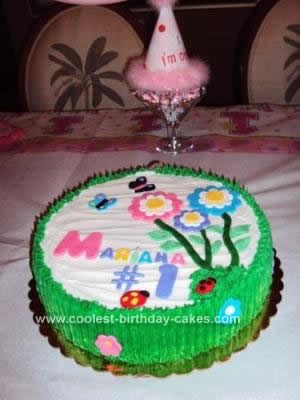 Mariana’s first birthday had to be special. After they had 3 boys they’ve got the precious princess. The theme was “flower girl” and she wanted something simple but sweet. I used buttercream frosting for the green and white base and grass and colored fondant with cookie cutters to create the flowers and butterflies. I also … Read more