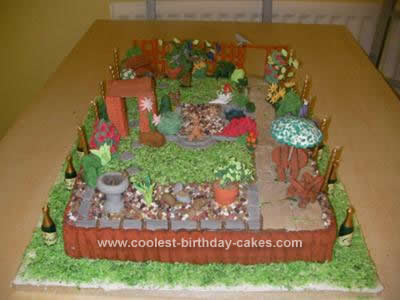 This English Garden Birthday Cake was made for my father in law and as he is a keen gardener with a beautiful garden. I made him a miniature garden cake, the cake is based on his own garden. The grass is green coloured coconut, I put the food colouring and the coconut in a small bag and then shook it until most of it was green. I then “laid it” on brown icing to make it look more realistic.

All the small detailed work is made using flower paste icing including the little flower pot man, most of the detailed work (flower pots, bench, table and chairs and parasol) were made well in advance and left to dry out. I drew a picture of the cakes exact to size before I made it so that the pieces would be in keeping and not too large or indeed too small.

The trellis is made with pastillage which was also made well in advance in strips and then glued together with royal icing. The pebbles were 5 different colours of icing rolled into little balls and dried out.

I made the pond by scooping some cake out and then putting blue icing into the hole. I then used piping gel for water and added fish, this went down well with everyone as it looked very realistic. The two trees were the most difficult and although I spent a lot of time online looking I could not find any ideas for a completely edible tree. In the end I made lots of trees from different types of icing and the flower paste worked the best.

I made a sausage and then pulled out 3 branches, I then cut more branches into each one with scissors holding the trunk to keep it in shape by the time I had done that it had began to go hard so I stuck a cocktail stick up the trunk and put it in a polystyrene block to dry. When completely dry I used a small cutter for the leaves.

The party went well and the cake was admired by all, hope you like it too. 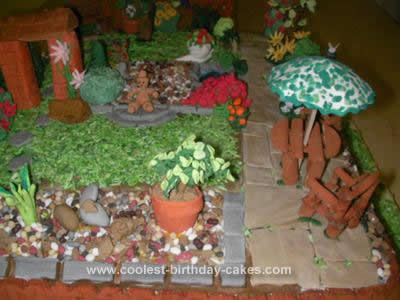 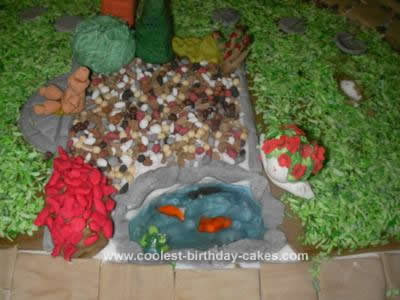 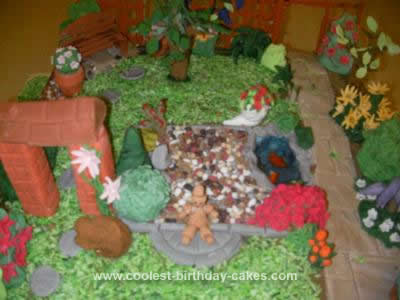