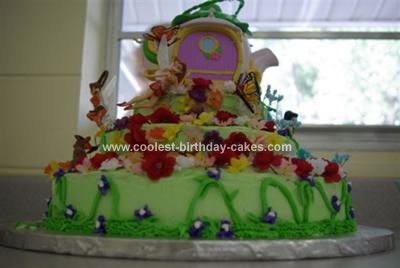 I made this Tinkerbell Garden Birthday Cake for my granddaughter’s second birthday. It was a three-tiered cake.

I used four boxes of cake mix but made the frosting myself. I divided the cake into four sections, each section representing one of the seasons, and this division made it easier to put the various fairies on the cake.

As for Tinkerbell, I used the Tinkerbell Fairy House provided for her as the piece that brought all the scene together. I wrapped wire around some fairies to make it look as if they were flying.

This Tinkerbell Garden Birthday cake was a big hit and I received many compliments.