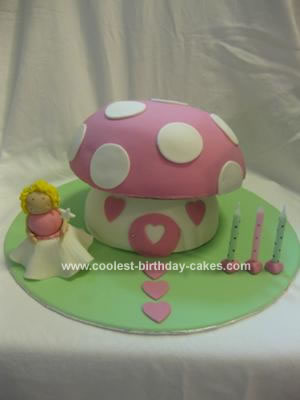 The idea for this Magic Toadstool Cake came from the Australia Women’s Weekly Birthday Cakes book – my daughter wanted a “fairy cake with me as the fairy” for her third birthday. The top of the toadstool was banana cake, the bottom chocolate cake.

I crumb-coated the cake with white chocolate buttercream (so the chocolate of the bottom cake wouldn’t show through the rolled fondant), then covered both sections in rolled fondant. I didn’t use supports as I only assembled the cake just before the party, but the top layer had a cardboard circle under it. I covered the cake board in green rolled fondant, as grass, then got to work on the fairy figurine. I used videos on You Tube to show me how to make fondant figurines and improvised the hair to resemble my daughter’s.

The toothpick support inside the figurine, the cake boards and the wire for her wand were the only parts of the cake that weren’t edible.