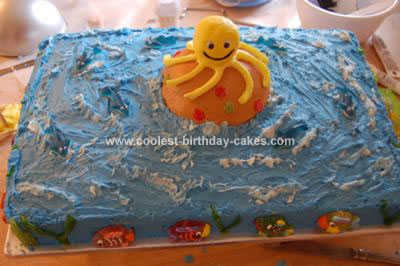 The octopus on the Octopus Island Birthday Cake is created using gum paste and was hard to make just by going on pictures from others that I had seen. This was the third or fourth one made at that.

The island the octopus is on was a half of the Wilton Sports Ball pan covered with icing, and smoothed with the paper towel technique. I iced the rest of the ‘water’ all blue and used a plastic spoon with the curved part dipped into white icing and pulled up on the water for the ‘white caps’. The fish on the side were gummy fish that I was extremely lucky to have found already decorated and the seaweed was fruit roll ups cut into strips and twisted (an idea I got off of here). The sharks were gummy sharks with the eyes added on.