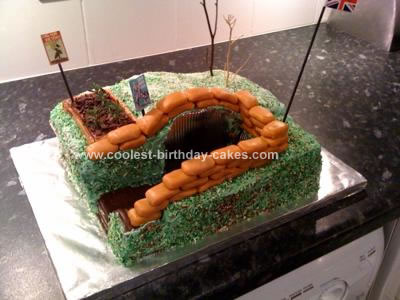 I made this homemade WWII Air Raid Shelter cake for my 97 year old granddad who has one in his back garden still! The cake was made in sponge with coconut grass and toffee strips for the ‘dig your own’ vegetable patch!

The steps going down into the shelter were after eight mints and the cake was built over an opened baked bean tin to create the shape and looks like corrugated iron. To make it real I added an MP3 player and speaker inside which played Vera Lyn songs, air raid siren and flying spitfires sounds ! It went down very well – a video was also made so you can hear it !