Take a look at the coolest homemade Hamburger cakes. 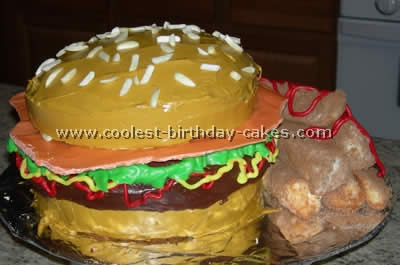 I made this cake for my 19 year old sister in law, Hannah. She has Down syndrome and is really into her birthday every year. She loves to go get fast food burgers and fries so thanks to this wonderful site I got ideas for hamburger cakes. The burger bun is a box yellow cake baked in two 8″ pans. I leveled the layer I used for the bottom bun and used a cheese slicer to carve the edges off the top layer of bun. I colored buttercream frosting to match a real bun color and used slivered almonds for the sesame seeds.

The burger patty is made from one layer of a 9″chocolate cake frosted with chocolate buttercream frosting. I added green icing for the lettuce look, red for the ketchup and yellow for the mustard. The cheese is made from the orange candy disks that you use for molded chocolate. I just melted them, poured them out on wax paper and chilled them till they were firm. I made the fries from a box mix of angel food cake baked in two 9″ loaf pans. Once they were cool I sliced them into strips and rolled them in cinnamon sugar to make them look like seasoned fries. Then I squeezed red icing over them to look like ketchup.

She and her younger siblings went crazy for this cake and I served a fondant covered traditional cake on the side (it appeared to be the “dessert” while this one was “Dinner”). 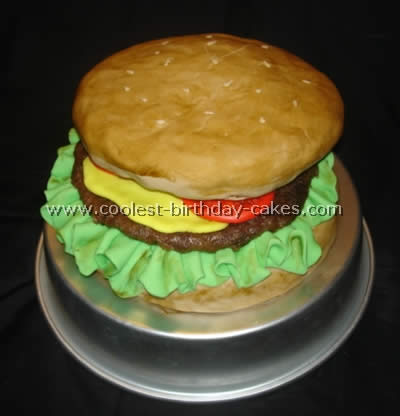 My friend was having her 29th birthday party at a bar/restaurant and I had the idea of making a cheese burger cake for her as part of a joke. She’s super skinny but she eats lots of junk food. The cake was the talk of the place. Thanks to this site for ideas on hamburger cakes this one is basic chocolate cake and fondant. 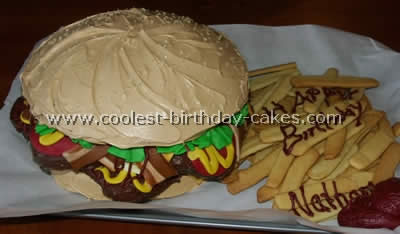 We saw a hamburger cake in the local supermarket but me being one who likes to “see what he can do” decided to try my hand at hamburger cakes. I felt I could produce a better one that was not airbrushed or very plain looking. I started out to make just one cake for my son’s birthday party but ended up making two after his mom saw the first and wanted one for the party with his friends.

I started with a base bun of white cake iced to resemble a bun followed by two layers of chocolate cake iced with chocolate icing for the meat. Each of those is topped with “double cheese” made of marshmallow fondant. My burger also has “onion”, “bacon” “lettuce” and “tomatoes”. Again all made from marshmallow fondant. I then topped it off with another layer of iced white cake as the top bun and added sesame seeds., Mustard and ketchup colored frosting were also added.

I used 8″ round and square pans for all but the top bun. For that I used a stainless steel mixing bowl. My condiments are layered across the cake so that when cut into it somewhat resembles a burger when cut. For the “fries” I used sugar cookie dough cut into thin strips to resemble steak fries and added the “ketchup”. It was also placed on a parchment paper covered sheet pan to resemble the old diner hamburgers. Needless to say it was a hit (both times) and very tasty. 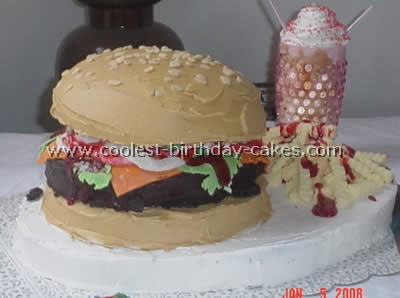 I used many of the ideas for hamburger cakes provided on this site. The “plate” is made of pound cake and chocolate, two 8″rounds trimmed up and placed together to look like an oval and frosted white with buttercream. The bottom bun is also a pound cake, another 8″ round. The top bun is just regular yellow cake.

I baked both an 8″ round and I used the Wilton round ball cake. I just put a very small amount of cake mix in there so I could have the appearance of a round bun. I just layered it on top of the 8″ round. The “meat” patty is chocolate. I had to trim it down to be just smaller than the bun. That made the crumbs show up so when I frosted it with chocolate frosting it looked very much like the real thing so I didn’t add any cookie crumbs like others recommended.

The condiments are all gum paste that I shaped by hand. I bought the Wilton food coloring and got a much better look. The sesame seeds are just rice krispies. The fries are pound cake cut with a Pampered Chef crinkle cutter. I baked the cake in a small rectangular pan and froze it before cutting. The ketchup is just strawberry jelly mixed with powder sugar for consistency. For the milkshake I used a regular glass that I had. I then took the vanilla cake and used a donut cutter to cut circles. I frosted the top of each circle and dropped four or so in the glass until it was at the top. Then I piped plain white buttercream on top in a whip cream pattern stuck in a normal straw and topped with sprinkles. We did the shake for one of the kids who was allergic to chocolate so I needed a part of the cake that was not chocolate or touching anything chocolate.

My daughter’s party was a chef/cooking party. It turned out great and was by far one of the easiest hamburger cakes I’ve made. Most of my time was spent sculpting the condiments. 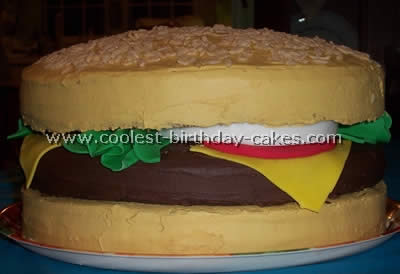 I made this for my twins Jimmy Buffet themed sixth birthday this past November ’07. The cake is actually three cakes, two yellow and one chocolate. I looked at several really great hamburger cakes and got a lot of ideas from other people.

I decided to make the cakes in 2″ deep x 10″ round pans. I shaped the chocolate cake to make it more burger-like. I trimmed the two yellow cakes so that they would not be too thick. I did ice both burger and bun. I used white icing with brown color added to get the bun color. All of the trimmings are rolled fondant.

The sesame seeds are rice krispies. The French fries are cut up pound cake and the big kosher pickle is fondant with some green color painted on for effect. The ketchup is red icing from a tube, a lot easier than trying to make my own! 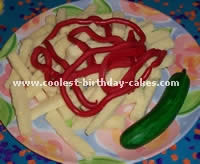 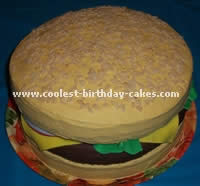 Cake by Andrea B., Bavaria, Germany 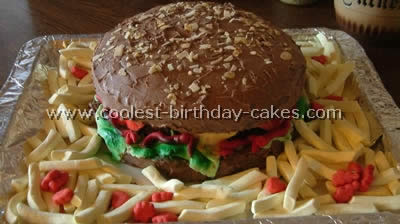 This was for my nephew’s birthday and everybody loved it. I made everything home made from scratch. I made two cakes in a round baking pan, one I cut in two halves for the top and bottom bread. The other one I used for the meat. The salad and cheese and everything else I made it out of home made marshmallow fondant and colored it.

Lots of work to make hamburger cakes but it was worth it. 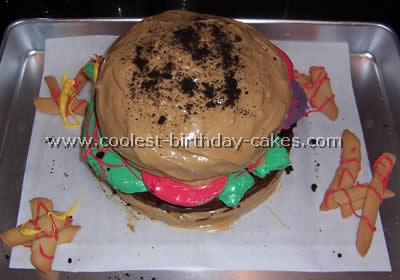 My step-daughter and I wanted to make a cool cake for Labor Day and after searching the internet for hamburger cakes we came up with this one. We made two 8″ cakes for the buns and one 8″ cake for the burger. My step-daughter had a great idea and used store-bought sugar cookie dough for the tomato, lettuce and French fries. We used a leaf cookie cutter for the lettuce and a round cutter for the tomatoes.

For the fries we cut thick strips like steak fries. We cooked the dough then frosted them. The cake was a huge hit and it really wasn’t hard to make. Try it! It was a lot of fun to make. 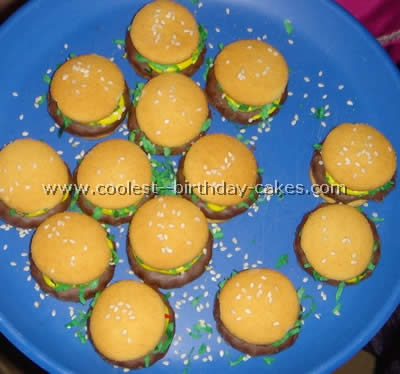 These are actually cookies not the usual hamburger cakes. The top and bottom buns are Nilla wafers. The meat is a Grasshopper cookie (mint flavored chocolate cookies – they’re dark inside too!). Coconut is dyed green for lettuce. Yellow and red frosting was used for mustard and ketchup. Sesame seeds were sprinkled on top.

These cookies are a bit time consuming but are a blast to eat and are very popular whenever we make them! They really look like tiny burgers! 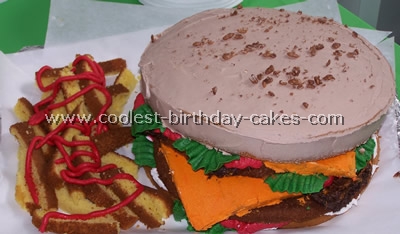 My office was celebrating the boss’s birthday and our party theme was Hamburgers in Paradise, thus hamburger cakes. To make this cake I baked a 12″ layer, split to cool. I baked a very thin layer for the cheese. I used tented buttercream frosting for the inside decorations. I used cake crumbs and chocolate frosting for the chili. The French fries are pound cake cut in to slices.

This cake went over very well and all was eaten, even the fries! 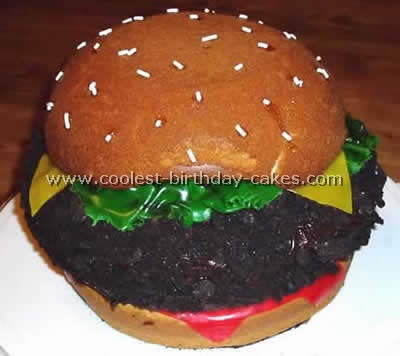 I had seen a “hamburger” cake at the grocery store around the 4th of July and thought “I could do that” so after scouring the internet for hamburger cakes I took the best ideas and put them together to make my own creation.

The burger is made from chocolate cake with chocolate icing with crumbled Oreos pressed to the outside (for that hamburger-ish texture). It was cooked in an 8″ layer cake pan. The buns are made from white cake un-iced to give it a bread-like texture. The seeds are actually just white sprinkles “glued” to the cake by corn syrup. The top bun was baked in a Pyrex bowl for its shape and the bottom in a regular 8″ layer cake pan.

The condiments were made from fruit-rollups which are pretty easy to cut and manipulate. Overall it turned up so much better than I ever expected and will be a huge hit at my daughter’s 16th birthday party I’m sure! 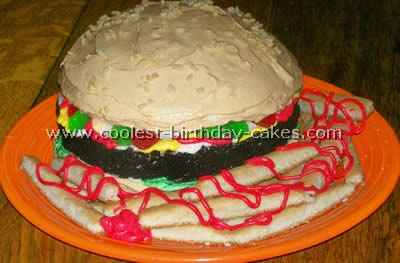 I love this site! I was looking for ideas for my daughter’s 16th birthday party when I came across hamburger cakes. I wanted something a little different. This was it! She was surprised and everyone loved it. I love to make things that are fairly easy yet make you look like you are simply amazing.

I used two cake mixes and baked four 9″ round cakes. (My 20 year old son ate the fourth cake later!) I used a large festive platter so it would look like a plate and offset the cake to leave room for fries. I made a cream cheese filling that looked like mayo and green icing with a petal tip to make lettuce leaves on the edge of the bottom bun.

Then I frosted the sides and pressed Oreo crumbs onto the side of center layer and placed it on bun. More “mayo” then “ketchup” and “mustard” then I placed the top bun. This is where I messed up. I forgot to trim the rise off the middle cake so when I placed the top bun it settled a little and cracked in the middle. A little extra frosting covered that but I had a little gap to fill now. I flattened green and red fruit snacks to look like pickles and tomatoes (albeit small ones). The fries are sugar cookies baked in rectangle then sliced placed on plate and covered with “ketchup”.

Thanks for all the great ideas here for hamburger cakes. I will definitely use more in the future.