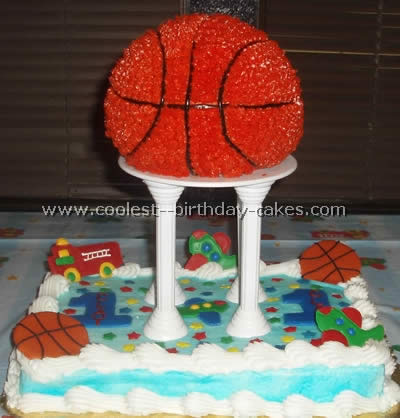 My son’s first and my daughter’s fourth birthday parties were held together since their birthdays are three days apart. So having to make two cakes I was able to make quite a few of the decorations in advance. A week or so before the party I traced images from the plates and napkins to create the basketballs, fire truck, airplanes and “ones” out of color flow icing. To make basketball cakes you have to use the Wilton’s ball pan and place on a 6” round separator plate.

I first iced the ball cake with terra cotta color buttercream icing and placed licorice strings on the cake to make the lines. I did this before piping the stars because you can move the licorice all around until you get it just right without messing up the cake. After I had the licorice placed like I wanted it I covered the ball with stars (tip 16). I then used the press in columns to elevate the ball cake over the sheet cake. I placed the color flow decorations on the cake as well as store bought star sprinkles.

At the party the ball cake was then taken off and given to the birthday boy to tear into. It was a lot of fun. 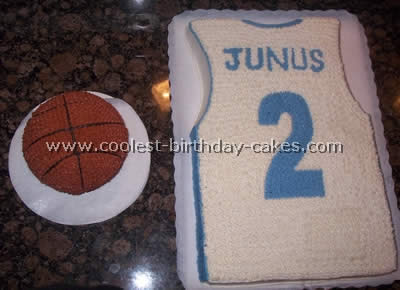 I made this cake for the two year-old son of one my co-workers. I was told it was the centerpiece of his birthday party and everyone wanted to know who makes such fantastic basketball cakes!

I made the basketball using a sports ball cake pan and buttercream icing tinted the exact color of an actual basketball. The shirt was a bit more difficult. I used a regular 1/2 sheet cake pan which I cut out in the shape of a jersey. I also used buttercream icing to decorate making sure I started with the sides first.

After icing the sides I wrote his name and number using blue icing then finished by filling in the jersey with white stars. 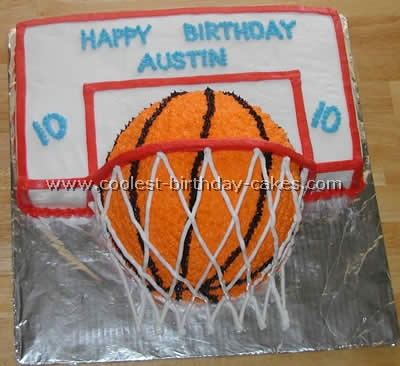 The ball was starred so that it would give you the effect of a ball. The lines were drawn on first. Then the lines added for more detail later. White frosting then was placed on the cake to create the net and a red line for the rim. I also made a red flat line to represent a backboard.

It was fun to make but basketball cakes take time to make.

Cake by Kasey B., Honolulu, HI 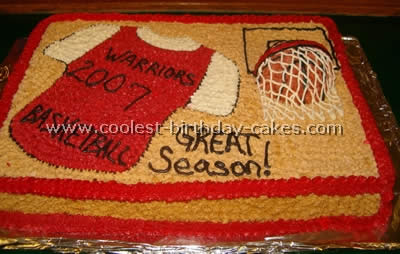 I made this cake for my son’s end of the year basketball party. I used a 16X20 Wilton’s cake pan and the Wilton’s six ball pan. I traced the t-shirt onto the cake and used the star tip all over it with the Wilton’s butter cream recipe for frosting.

I placed one ball on the pan and drew a back board and basket around it. I also made each of the kids their own basketball cakes with their name and number on it. Everyone loved the idea and I got tons of compliments!