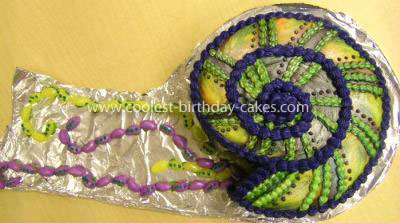 These two little beauties were so much fun to make! For each cake I used two round cake pans and put them on top of each other with a layer of frosting between. I found that it helped to put the layers together with the frosting in between and then wrap them and put them in the freezer for an hour to set before you try to cut them. I cut out the shape of an ammonite and then crumb coated them.

To get such bright colours, I used Wilton food gel food colouring. I mixed icing with blue and green but didn’t mix them completely and then spread it on the cakes. I used a small brush top add super concentrated red and yellow icing to make the “sections” on the top of the cake. I put it in the fridge to cool and the used a shell piping bag to make the swirl and the boarders. I then put the cakes on tin foil covered Bristol board and added jelly beans as the tentacles which I “glued” on with frosting.

I finished the Ammonite Cakes by spraying them with “DUFF” silver food spray to give them a shimmering look. The one thing that I would change is that there was so much food colouring in the frosting that all the kids who ate it had very colourful faces afterwards! 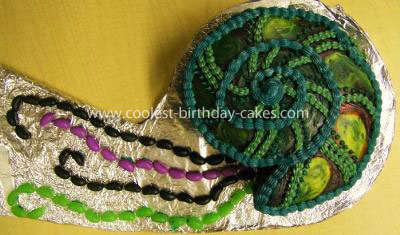