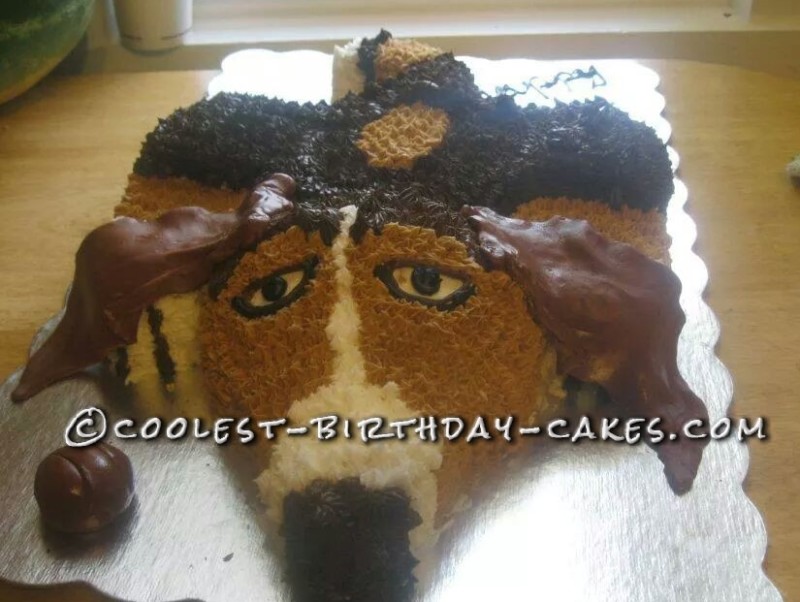 The inspiration for this Beagle cake was my son’s obsession for Beagle dogs. Each year I try to make him and his twin sister their own cakes.

I got bold and attempted to make him not just dog, but a beagle dog. I played around with a layout of different pans long before I made the cake. I used basic shapes. After finding different sized pans (a couple of round, one nine inch, one a six inch and an oval pan), I started baking. I made an extra round for shaping.

I baked two rounds and set the first one as the main body. I trimmed another as the base of the head. I used the third round to trim the tail and hind legs and front paws. I also trimed a litte extra to ad a snout .  I made and oval shape and stacked it on top of back to give the definitition of his back. If I could redo this cake I would have domed it more.

Next, I added a layer of frosting to attach everything. I always use buttercream frosting and put it in freezer for fifteen minutes to stiffen and hold. I used chocolate buttercream and regular. I used chocolate for the dark spots and mixed the two for a light brown for the back and other spots. I used a star tip to frost the entire cake to look like fur. I saved some white and made a small amount of black for eyes, eyebrows and small parts over the cake like paws and nails.

Then, I decided to make a small batch of light brown marshmallow fondant for the ears. I rolled out a thin sheet and cut out ear shapes and draped them over sides of head. I had some left and rolled a ball and cut lines to make this puppy a ball.

All in all it was a fun learning experience and my son absolutley loved it. I make cakes alot and they are good, but this one I was proud of!