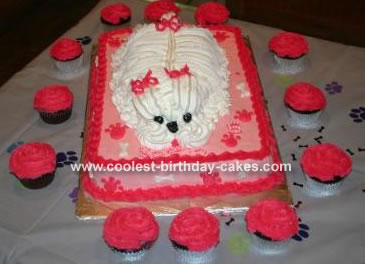 My niece received a Malteshon (half Maltese, half Bishon) puppy earlier in the year, so when she got ready to have her fifth birthday party she wanted her cake to look just like her little dog Isabelle!

This puppy cake was so very simple to make: I just made a sheet cake and some cupcakes. After icing the sheet cake, I arranged seven cupcakes on the top center of it (three rows two cupcakes wide and one centered on the end). I used basic white buttercream icing and a very large star tip, starting at the center and pulling out and down each side to resemble the dog’s hair.

I went all the way around both sides and the back, shaping the dog’s “body”. I did the same thing on the front, building up the “ears” and making little swirls on each side of the face for “cheeks”.

I iced the leftover cupcakes pink and placed them around the larger cake for the really little kids. It was a hit and definitely looked like my niece’s little dog Isabelle!