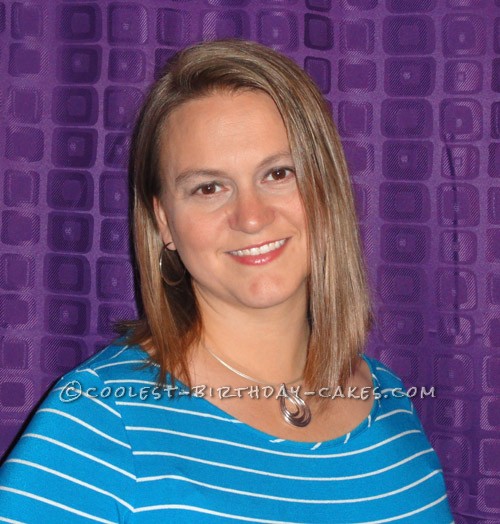 Cake designing and art go hand in hand, you can go as far as calling it “edible art”. Yet, Patricia from Memphis, self-taught cake designer/artist, proclaims she was “TERRIBLE at art and avoided it at all costs”. (She used the all-caps and added that she still doesn’t draw well on paper!). But drawing with icing, or sculpting with fondant, well, that’s a whole different story. And Patricia has become an EXCELLENT cake artist.

Just like for so many of us, the love for cake designing was instilled back at an early age, when Patricia’s Mom would make most of the birthday cakes. Nowadays, Patricia is instilling that same love to her own four kids by having them “help” with the family cakes. “I let them measure and mix,” she says. “They practically beg for the leftover fondant scraps when I’m done. I swear they would live on it if they could!”

Once she really started getting into it, Patricia’s Mom gave her all of her pans, tips, candy molds, and other cake decorating equipment. She’s taught herself everything via YouTube and other websites, as well as through simple trial and error, “and I’m still learning,” she adds.

So now, apart from making her own kids’ birthday cakes, Patricia gets special requests and orders from family member, friends, and quite a few other people who have bumped into her cake creations on various occasions.

When Patricia’s eldest daughter was four, her love for cake-decorating was rekindled. From that day on, Patricia has been making birthday cakes for her four children. And for family members. And for friends. And for quite a few other people who have bumped into her cakes on special occasions.

Patricia doesn’t have an actual business yet, “but I would love for it to be in the near future,” she says. “I came up with the name ‘Treats by TriciaLee’ in order to make up some business cards for friends and family to hand out, and I have also made a Facebook page under that name.”

But with all due respect to the burgeoning business, Patricia is a full-time stay-at-home mom, so cake designing is mostly done while the kids are at school and at night. “At times I’ve had to stay up pretty late to get things done,” says Patricia. I’ve sometimes had to stay up until 2 or 3 am, only to have to get back up at 6:30 to get the kiddos ready for school.”

Juggling between the two worlds of cake entrepreneurship and stay-at-home “mothership”, has involved countless trials and tribulations. She specifically recalls that super-stressful weekend she took on eight cakes to make. After “learning her lesson” she now limits herself to three cakes a week max.”

Would you like to be featured on our site?!

We really appreciate cake makers who share their creations and inspiration on our site. If you’ve contributed at least three cakes to our site and would like us to feature your cakes or cake-business (for free, of course), please contact us. Obviously we can’t feature everyone, but we will do our very best!

2 thoughts on “Patricia from Bartlett, TN”